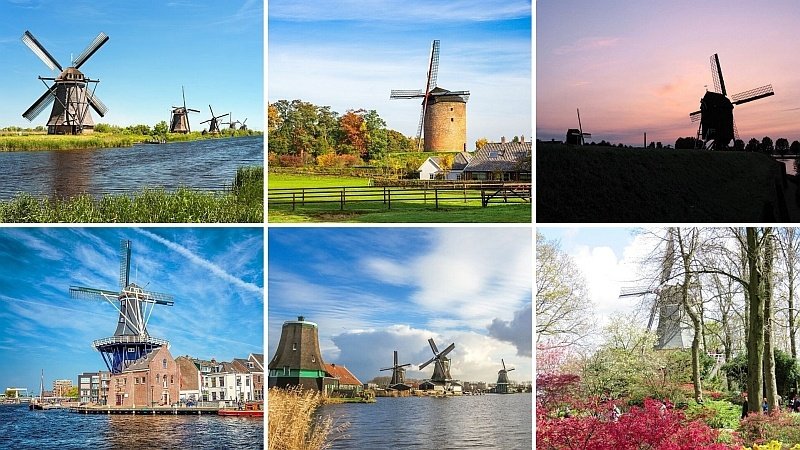 The first windmills in the Netherlands appeared somewhere in the 12th century along the coast. They were used for grinding grain. Later on, in the 15th century appeared the first polder mills that were used to drain the water from marshlands or lakes so that land could be reclaimed. Dutch were pretty good in water management those days. Well, they are still good at it today, too. Later on, there appeared saw mills, oil production mills, paper mills, dye mills, and so on.

Read more: 20 Best cities to visit in the Netherlands

Fun facts about the Dutch windmills

Where to see windmills near Amsterdam?

When you travel in the Netherlands, you will spot for sure a windmill or two, but there are two places that are famous for their windmills: Kinderdijk and Zaanse Schans. And for a reason. As I already mentioned, these two places have the biggest concentration of windmills at one location.

Read more: The most beautiful places in the Netherlands

The windmills of Kinderdijk

I won’t exaggerate if I say that Kinderdijk is perhaps the most popular and most visited attraction in the Netherlands after Amsterdam, of course. Contrary to what most would think, Kinderdijk is not that close to Amsterdam. It’s closer to another lovely Dutch city – Rotterdam. I know, that we are spoiled here in the Netherlands, thinking that anything that is more than a 30-minutes’ drive, is far away. Still, with an hour and 15 minutes from Amsterdam, the windmills at Kinderdijk make it a great day trip from the Dutch capital.

Kinderdijk is the place to go to admire the outstanding water-management skills of the Dutch. This is also why Kinderdijk is included on the UNESCO World Heritage Sites list. The system of 19 windmills built in the beginning of the 18th century has been used to pump out water from what once was a bog.

Walking around in Kinderdijk is free of charge, but you should respect the privacy of the people living in some of the windmills. There are also two windmills that can be visited as museums. The price of the ticket is 11 EUR. If you buy it online, it’s 9 EUR.

The windmills of Zaanse Schans

Zaanse Schans is a small open-air museum village, where one can taste how life was in the 18th and 19th centuries in the Low Lands. The village was created in the 60s and the 70s, when lots of historical buildings and windmills have been transported there from other parts of the Zaan area.

In Zaanse Schans you can see windmills that actually do the job. There’s a spice mill, several oil mills, a dye mill, two saw mills, two paper mills, a flour mill, and a grain mill. All mills work and can be visited. In the windmill village, there are artisanal shops, where you can see how things like sails, clogs, or cheese are made. There are also a copper smith, a liqueur distillery, a pewter foundry.

At only 20 km from Amsterdam, Zaanse Schaans is the easiest day trip from Amsterdam to see windmills. Each museum/windmill has its own paid entry, but you can buy a Zaanse Schans Card for 15 EUR, which will give you access to most of the attractions.

The 11 remaining polder windmills in the Schermer (De Schermer) area are part of one of the greatest projects of the Dutch to reclaim land from the water. For 3 years the Scher Lake (Schermeer) was pumped out with he help of 52 polder mills and in 1635 the lake disappeared completely.

Today, you can visit The Museum Mill in Schermerhorn, which is a part of a complex of 3 polder windmills. The polder mills could pump out up to 60 000 l of water per minute, which is absolutely amazing. You can visit the miller’s home in the mill and climb all the way up to the ridge to see from very close how the mill is actually working.

The Museum Mill is only 40 km from Amsterdam. The entrance is 4,50 EUR.

This is perhaps the most famous single windmill in the Netherlands. The city scape of Haarlem is absolutely unthinkable without De Adriaan. The foundation of the mill was part of the old city defense wall, but the mill was built in 1778. It was used to produce cement from tuff stone.

In 1932 the icon of Haarlem burned down in a fire and it took 70 years to restore it in its complete glory. The windmill was open again in 2002. Today there’s a museum in the windmill and on special occasions it can be seen working. The entry to the museum costs 5 EUR (5,50 EUR online skip-the-lines ticket).

The windmill at Keukenhof

Where else in the Netherlands can you see two of the absolute Dutch icons together: tulips and windmills? At Keukenhof, of course. Although the windmill is not the main attraction in the biggest tulip garden in the world, it’s absolutely lovely.

From the top of the mill, there’s amazing view to the tulip fields and the park. You won’t learn much about the windmills in general but you’ll have a gorgeous view.

Read more: Is Keukenhof worth visiting? and Everything you need to know about Keukenhof

The windmills of Heusden

One of my favorite places to see windmills in the Netherlands, is the little town of Heusden. Located in North Brabant, close to Den Bosch, Heusden looks as if the time has stopped a few centuries ago. Completely restored, according to a map of 1649, Heusden is a perfect example of a fortified town.

There are three windmills in Heusden. Most people won’t know that, but the windmills haven’t been there all the time. Although they were put there in the 1970s, they organically blend with the landscape and today Heusden is unthinkable without its windmills.

Where to see windmills in Amsterdam?

Contrary to popular belief, you don’t need to leave Amsterdam in order to see windmills. There are 8 windmills in Amsterdam itself!

Read more: How to spend the perfect day in Amsterdam

This is the easiest windmill to see in Amsterdam. It’s located not very far from the city centre. The windmill was built in the beginning of the 19th century at the place of a windmill from the 16th century. It was a part of series of corn mills on Singelgracht (the waterway that encircles the centre of the city) and it’s the only one which has survived till the present day. De Gooyer windmill cannot be visited, but next to the mill is the local ‘t IJ Brewery, where you can taste some of the best craft beer in Amsterdam.

De Otter is a saw mill located not very far from the city centre. The saw mill was built in 1631 and was part of group of saw mills in what today is the Western part of Amsterdam is. De Otter was recently completely renovated and since 2019 is working again. Built around 1631, it’s the oldest windmill in Amsterdam, that hasn’t been moved around.

The Rieker Mill is just outside of the city centre, at the southern end of the Amstel Park on the Amstel River. This polder mill stood originally in the village of Sloten and was moved to its present place in the 1960s. You can see the mill working on the weekends in the summer.

D’Admiraal is the last remaining chalk mill in the Netherlands. It was built in 1793 and it’s still working. The Chalk Mill d’Admiraal is open for visits every second Saturday of the month in the summer. The entry is free of charge.

Other windmills in Amsterdam

If you are not travelling by car in the Netherlands, your best bet to visit the windmills will be an organized day tour from Amsterdam. However, you can easily visit Zaanse Schans and Haarlem by public transport from Amsterdam. If you are staying in Rotterdam, Kinderdijk can be even visited with the water bus.

Here is my selection of tours from Amsterdam.