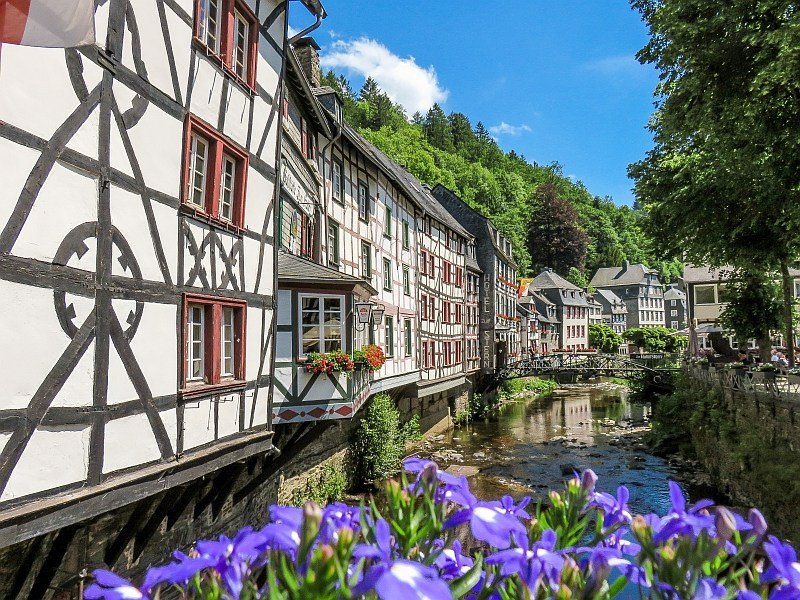 I first visited Monschau in the winter when the smell of mulled wine and roasted chestnuts was lingering in the air and I thought this place cannot get anymore magical, but I was proven wrong. I visited Monschau in the summer again and it was the perfect fairy-tale town: with the medieval half-timbered houses and the flowers hanging everywhere – on the houses, on the bridges, on the lamp poles. They call Monschau the Pearl of the Eifel as it is irresistibly charming.

Read more: In love with the German style of half-timbered houses? Get your dose of inspiration with this post about the prettiest half-timbered towns in Germany.

Monschau is what you call a place postcard-beautiful, but this doesn’t come without a downside. The place is quite touristy, and while during Christmas this is kind of cool, as it contributes to the business and the liveliness of the place, in the summer it looks a bit overcrowded.

Read more: Everything you need to know about the Christmas market in Monschau.

How to get to Monschau

Monschau is located in Germany near the Belgian border. It’s an easy day trip from the nearby big city of Aachen (45 min. by car). If you are staying in Maastricht (the Netherlands) or in Luik/Liege in Belgium, it will take you about an hour to Monschau. From Cologne and Bonn, it’s less than an hour and a half drive and from Luxembourg City it’s a 2-hours’ drive. The nearest airport is the Cologne-Bonn International Airport. The historical centre of Monschau (the so-called Old Town) is car-free, so you will need to park just outside of the town.

Train or bus could be also a good alternative to get to Monschau. Monschau has its own train station, so it takes just a bit more than an hour by train from Aachen to Monschau.

Well, Monschau wasn’t always called that way. In 1918 after WWI with an official decree Montjoie was ‘Germanized’ and became Monschau. It was also kind of disputable whether Montjoie/Monschau belonged to Germany or to Wallonia (Belgium). The name Mons loci was first mentioned in 1198 in connection with a castle on a hill above the Rur River, which later became the Castle of Monschau.

In the 17th century Monschau was already an important cantre for wool processing and woollen fabric production. This is how the place became quite rich and popular. By the 18th century the fine woolen fabric produced in the town from the merino wool imported from Spain, has made a name for Monschau. However in the 19th century, Monschau couldn’t keep pace with the industrialization and the last factory closed its doors in 1908.

Things to do in Monschau

Although Monschau is quite small, there is still a lot to do. If you are short in time, one day will be enough to see the highlights of Monschau. However, you can easily spend a couple of days in the town, as you can explore from there the beautiful Eifel National Park.

We took the panoramic road that starts straight after you cross the river at the Market Square. It led us up the hill to a terrace from where we had this this amazing panorama of Monschau. From there you can actually see how small Monschau is, snugged between the hills with the Rur River curling its tail through the city.

We could stand there for hours and watch the town from above: the people crossing the bridges and taking pictures (we were also going to do that…), the occasional bird-of pray soaring in the sky (don’t ask me about the names, I’m really bad with birds), the green hills reflecting the sun creating infinite number of green shades (even I can’t name all of them).

On the terrace, there are information boards, where you can learn more about the little town and its rich history connected with the textile manufacturing. Well, there are also some benches, where you can sit and catch your breath.

Solve the mystery of Der Haller

The old tower in ruins Der Haller is shrouded in mystery. There are three theories about the origins and the purpose of Der Haller. The first one is that it served as a watch tower and was part of the old bulwark. The second theory is that it belonged to the fortifications of the Castle of Monschau. And the third theory suggests that it was a part of another castle that hasn’t survived to the present day.

The tower is perched on the Rahmenberg (Frame Hill) and it can be easily reached from the market. Take the panoramic road and enjoy the scenic view all the way to the top of the hill. If it has rained, the stairs can be pretty slippery, so make sure you wear comfortable shoes when you venture on this trip.

Unfortunately the tower cannot be visited, but the view from the viewing platform and the top of the hill is just amazing. You can see the whole town, the Ruhr meandering through the town and the Castle of Monschau on the opposite hill.

Head to the Castle of Monschau

The Castle of Monschau (Burg Monschau) was built probably around the beginning of the 13th century. In 1543 the castle and the town were captured by Charles V and became part of the Holy Roman Empire. Today, the castle is a youth hostel. It also serves as a venue for various concerts and performances.

The Historic Mustard Mill (Senfmühle) is another attraction in Monschau. The Mustard Mill was built in the end of the 19th century it was originally powered by a water wheel. The Mustard Mill has its own shop where you can buy the delicacies that they produce or try one of the 22 different types of mustard . There’s also a restaurant attached to the mill which serves dishes prepared with… mustard, of course.

The Red House (Rotes Haus) is one of the highlights of Monschau. It was built in 1760 for the rich textile magnate Johan Scheibler. It has a lovely collection of Rococo furnishings and gives an idea how life was in the 18th-19th century. The eye catcher, however, is the beautiful winding staircase from oak. The Red House is included in the so-called Wool Trail (Wollroute). This route features a number of attractions connected with the textile production in the Euregio.

Fun fact: Euregio is the name of the border region between Germany, the Netherlands and Belgium.

Read more: Other lovely place on the Wool Trail (Wollroute) include Vaals in the Netherlands, Eupen and Verviers in Belgium, and Aachen and Euskirchen in Germany.

Relax on the romantic Market Square

When you have enough of walking around and taking pictures, get to the Market Square to chill out. The surrounding cafes and restaurants have their tables on the square, so it’s buzzing with people having a drink or a meal, depending on the hour of the day.

At one end of the Market Square you can see the former monastery Aukloster with the Aukirche, or St. Mariä Empfängnis Kirche (the Church of Our Lady of Immaculate Conception), as the official name of this Catholic church is. The Aukloster was built in the beginning of the 18th century as a monastery of the Order of the Friars Minor. Today, the former monastery is a venue for conferences and meetings.

At the fork on the square there is a fountain (Tuchmacherbrunnen or Weberbrunnen), which at first seems unnoticeable, but at a second glance is quite interesting. It represents the textile manufacturing process in the 18th century, when Monschau was an important player. You can see the carder, the dyer and the weaver – all stages of the manufacturing process.

Other places of interest in Monschau include the Protestant Church next to the Red House. The church was built in 1789, but the church spire is a century older. The golden spire with the swan belonged to the Friedenskirche in Cologne-Mülheim, which was destroyed during the flood of 1784.

Where to stay in Monschau

Although Monschau is mostly visited on a day trip from the surrounding bigger cities, I can highly recommend that you spend a few days there, or at least stay for the night. There’s also a great choice of hotels, holiday houses, B&B’s and apartments.

Because of the excellent air quality, in 1996 Monschau was recognized as a health resort. This brought a lot of local tourists and contributed a bit to the problem of overtourism in the town.

For ultimate charm and authenticity, stay in one of the half-timbered houses:

If you want to have a more luxurious stay, you can choose among:

Pin this to your Germany travel board!