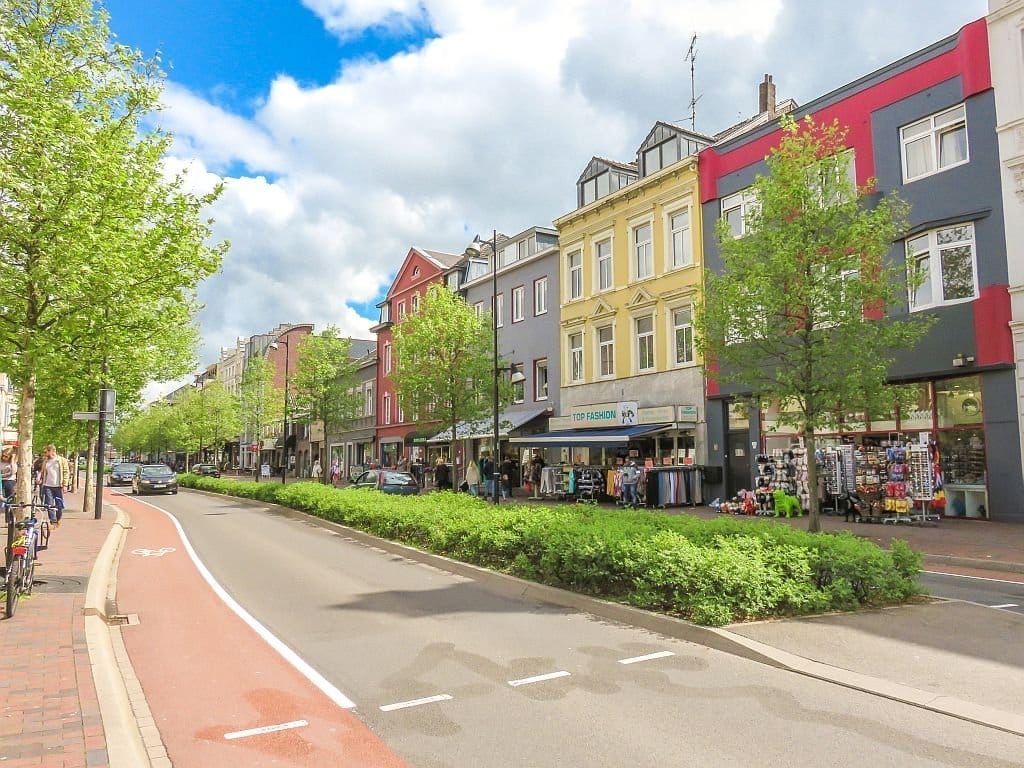 Get on the roof of the Netherlands in Vaals! Find out here what are the best things to do in this lovely place in South Limburg!Click To Tweet

Things to do in Vaals

I have visited Vaals two times – once in the winter and once in the spring. You can better enjoy the place on a sunny day. If it rains, better do not go to Vaals, unless you don’t mind, of course.

Climb Vaalserberg – the highest point in the Netherlands

“Look, look we are going up! A hairpin bend!!!”, I was so excited the first time we were driving up the Vaalserberg. After a few years living in the Netherlands, you get used to the flatness of the landscape and a little hill seems a monstrous mountain to you. I guess, most of the kids visiting Vaalserberg for the first time would have the same reaction. And still with its 322,4 m (last checked in 2017) Vaalserberg is the highest point in the Netherlands. OK, on continental Netherlands, as Mount Scenery on the Caribbean island of Saba beats Vaalserberg with its 887 m.

My advice is to leave your car at Vaals and walk to the top of the hill. The nature is too beautiful too watch it from your car seat. It takes about a little less than half an hour to go to the top, depending, of course, on where your starting point in Vaals is.

If you still want to drive to the top, there are enough parking spaces to leave your car. It costs 2 EUR per day. Make sure you have 1 or 2 EUR coins to pay for the parking.

Visit 3 countries in 3 seconds at Drielandenpunt

At the Drielandenpunt (Three-country point) – where Belgium, Germany and Netherlands meet you can run around the border stone, jumping from one country into another as fast you can. Well, kids mostly love doing this, but for someone who has grown up in a country with real borders, border controls, passport checks, long waiting hours and visa stamps, running around the border stone seemed a fascinating thing to do. I didn’t go that far, just walked a few times slowly in a circle, crossing the border lines many times and thinking about how your background makes you appreciate things differently.

Not many people know, but once (for almost 100 years) the tripoint was actually a quadripoint. The fourth country in the puzzle was the no man’s land Moresnet. Between 1816 and 1920 the small triangle of 3,5 sq. km was a neutral territory, which was governed by the Netherlands and Prussia. Today Neutral Moresnet is part of Belgium.

Get lost at the largest maze in Europe

The maze at the Drielandenpunt was designed by the British landscape architect Adrian Fisher and is the largest outdoor maze in Europe. It’s also the highest one in the Netherlands, which is understandable. I just love how the Dutch never miss an opportunity to underline the height of their highest hill. There’s also a playground near the maze and it has a plate saying that this playground is the highest one in the Netherlands. Of course.

To solve the maze, it will take you anywhere between 45 minutes and an hour.

The entrance to the maze, where the souvenir shop and the local tourism office (VVV) are housed, is rather particular. From above it looks like a giant butterfly that has landed near the maze.

Note: As of May 2019, there are two prices on the website of Drielandenpunt for the Labyrinth – 5 EUR and 5,50 EUR. I guess they’ve just raised the prices and hadn’t yet updated all the data. When I visited in April 2019, the price was still 5 EUR.

When you just think you can’t get higher than Vaalserberg, you will be surprised, you can. The Belgian found a way – the Boudewijn Tower. Standing on top of the 50-meter high viewing tower, feeling the wind in your hair and the occasional raindrops (I hope it won’t rain..), you can admire the views that stretch over the three countries as far as the eye can see.

That day the clouds are hanging low, playing hide-and-seek with the sun rays and I stand there on the tower mesmerized by the light and dark patterns that move fast over the landscape. It doesn’t rain.

The King Boudewijn Tower (as the complete name of the tower is), was built in 1970. Then it was only 33 m high. In 1993 the first tower was demolished and the new, 50-m high one was built in its place.

Walk in the sky

If you are a tower-climbing addict, or if you love going up and enjoying the world from above, there is one more viewing tower at the Three-Country Point, this time on Dutch ground – the Wilhelmina Tower. The current tower is tower number 3. The first wooden tower was built in 1905 but in 1945 it was demolished as it was severely damaged during WW2. In 1951 the tower was rebuilt. In 2011, however, the old Wilhelmina wooden tower said goodbye to this world and the new Skywalk came at its place.

I haven’t tried the Skywalk yet, but I can imagine what it will be to stand on the glass platform, 35 m above ground at sunset, for example. As the tower is open from 10 am till 8 pm, you can still catch the sunset there.

The entry fee for the Skywalk is 3 EUR.

If you arrive early enough at Drielandenpunt, at the local tourism office there, you can get info and maps for some short (or not so short) walks in the surroundings. Or you can just take a path, head on and see where you will get.

Places to see in Vaals

At first glance Vaals seems to offer only one busy, boulevard-type of a street, lined up on both sides with shops, restaurants and cafes. Well, you have to look a bit further than that. I went to Vaals absolutely unprepared, didn’t know anything about the place or its landmarks, so it was fun walking around and discovering it as you go.

The lovely octagonal building I saw, turned out to be the De Kopermolen (the Copper Mill) – a former Lutheran church built in 1736, turned into an Art and Culture Centre today.

The building that looked like a modest palace turned out to be a former textile factory with a house en suite, built by the industrialist Von Clermont. It was a wool processing mill, where the fleece from the sheep was carded, combed, dyed and spun into yarn. The Von Clermont House serves today as the Town Hall.

In the courtyard of the Von Clermont House there is the monument of the wounded soldier – a memorial for the citizens of Vaals who have lost their lives in WW2 and the wars in the Dutch Indies.

At the square in front of the Von Clermont House there is an interesting fountain that tells the industrial history of Vaals as it reminds a yarn dye bath.

We spotted two lovely churches in Vaals. The first one, the Protestant Church, looked a bit weary and tired, but it could have been because of the clouds and the grey weather. The church was built in 1671 against the old marl-stone tower of the parish church for the protestants of Aachen who were persecuted because of their religion.

The second church we came across was the Saint-Paul’s Church – an imposing building in Gothic Revival style with impressive stained glass windows. The church was built in 1893 to replace the old Saint-Paul’s Church, located some 60 m further down the road, which was too small for the congregation.

Vaals has its own castle. Do you remember the Clermont family and their textile factory? Well, they were quite wealthy, so at a stone’s throw away from the factory they built their mansion – Schloss Blumenthal. Today the Bloemendal Castle is hotel.

How to get to Vaals

Both times I went to Vaals, I did it by car.

If you are staying in Maastricht, you can reach Vaals in less than 30 minutes by car (30 km). Wherever you are staying in Limburg Vaals is an easy day trip, too. Even from Amsterdam it’s not too far away – 2 and a half hours (230 km).

If you are in Germany, from Cologne it’s about an hour (90 km) and from Aachen you can even walk, as there are only about 5 km.

Qliner bus line 350 runs at 30 minutes intervals  between Maastricht and Aachen and stops in Vaals.

If you are anywhere else in the Netherlands, click on the button below to plan your journey.

Have you been on the highest mountain in the Netherlands? Pin this for later! 2 thoughts on “Vaals – on the Roof of the Netherlands”