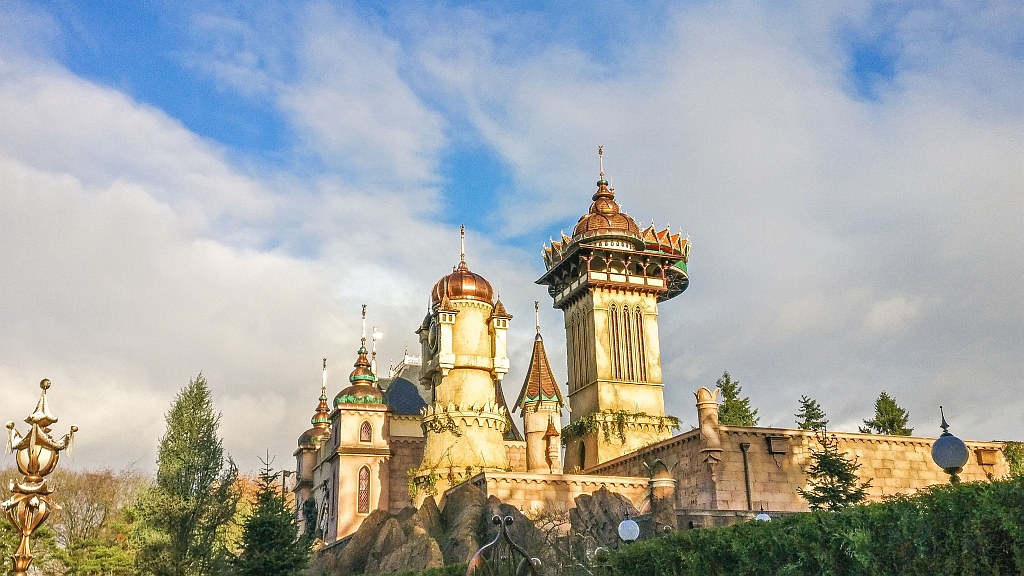 There’s a place in the Netherlands where fairy tales come to life. Literally. You can see the wolf knocking on the door of the house of the seven young goats or the red shoes of Karen that never stop dancing. The Efteling theme park (De Efteling in Dutch) is not just a regular theme or amusement park. It is a place where you get transported into the magical world of fairy tales minus the commercialization and into-your-face attractions. Unleash your inner child in this enchanting world, as the Efteling is not only for kids but also for grown-ups who need a bit of magic and the occasional thrill in their everyday lives.

Efteling is open again! You’ll need to make a reservation and buy your ticket in advance. Due to the COVID-1 measure you can’t enter the park without a reservation or a ticket.

Buy your tickets for Efteling here!

DISCLOSURE: This post contains affiliate links. If you make a purchase via one of those links, I will earn a commission at no extra cost for you. This is not a sponsored post. Each time I have visited Efteling, I have paid everything myself.

The Efteling will always be one of my favourite places in the Netherlands and I know, I’m lucky to live only 10 km away from the park and be able to visit it oftener than the rest. Here, where I live, people grow up with the Efteling being their backyard playground, and I am a kind of jealous about it. Most Dutch kids living in the area, get a whole year subscription for the park from their parents. Thus, after school when biking back home they can pop by in the park and enjoy a ride or two, or just hang around.

What makes Efteling so unique and unusual?

There’s a story behind each attraction – a fairy tale or a local legend that is told with a passion and all details are mastered to perfection to give you the illusion that you are a part of the story. The waiting areas for the coasters (Baron 1898, the Flying Dutchman or George and the Dragon) for example, aren’t just simple spaces where you are standing in queue. They tell you the story in such an immersive way that you become part of it – you go on a quest to explore far lands or to work in the mines.

The Fairy-tale Forest is not only for kids, although kids are having most fun running around and hugging the giant mushrooms that are radiating gentle music. The Fairy-tale Forest takes you on a journey where well-known and less known, but locally popular, fairy tales come to life. There’s a talking tree telling stories, you can spot the house of Hansel and Gretel, the Sleeping Beauty and Cinderella aren’t missing as well, and the Little Match Girl always gets a tear in my eye.

This Dutch theme park is not your regular amusement park where less or no attention is paid to landscaping. Located amidst  a forest, the Efteling is a real park with beautiful gardens and a lot of green.

And what can be more unusual than a talking dust bin that eats paper? The talking paper gobbler Holle Bolle Gijs invites all kids (and adults) to clean the park by repeating “Papier hier! Papier hier!” (Paper here! Paper here!).  Indeed the park is pretty clean as kids will run around collecting everything they see on the ground and sticking it into the mouth of Holle Bolle Gijs just to hear him saying once again “Papier hier!”

Brief history of the park

On the grounds of a former sports and recreational park created in 1933, the first 10 fairy tales and the Fairytale Forest open in 1952. Efteling was born from the love and the crazy idea of three great men: Mr. van der Heijden (mayor of Loon op Zand), his brother-in-law Mr. Reijnders (film-maker) and the artist illustrator Anton Pieck. I recently saw a documentary made for the 50th anniversary of the park, where the already grown-up children of the mayor and the film-maker were telling how actually the Efteling began.

You can feel how much love and imagination went into the making of it. They were using simple techniques to animate the fairy world around them, without any robotics or high-end technology, yet with great success, as the kids believed everything they saw was real. Thus, we learn that the heaving bosom of the Sleeping Beauty was actually made from a bike tyre and that Snow White used to stay at the cupboard in the house of the Reijnders family and the kids were playing with it before it was installed in the park. Unfortunately, this documentary is only in Dutch.

The visual concept of the Efteling is done by the Dutch artist Anton Pieck, who worked for the park between 1952 and 1974. In the years after, his successors followed his concept and designs and this is why today the theme park is so coherent in its visual appeal. The nostalgic drawings and fairytale world of Anton Pieck come to life in the Efteling.

How to get to Efteling?

Located centrally in the Dutch province of North Brabant, Efteling is easy to reach by public transport. Basically, you will need to get either to the train station in Den Bosch (‘s-Hertogenbosch) or to the one in Tilburg and get the bus respectively to Tilburg or Den Bosch. Bus lines 300, 301 and 136 that run between these two cities stop at the Efteling. Line 136 is slower than the other 2 options.

If you are travelling by public transport, check the possibilities by clicking on this button.

If you are travelling from Amsterdam or Brussels to the Efteling, you might use Flixbus as well, just search for Kaatsheuvel (De Efteling).

The park is also easy to reach by car, although during school holidays or sunny weekends there tend to be slight traffic jams in the morning when the park opens and in the evening. If you arrive by car, you should consider that you will need to pay extra 10 EUR for parking.

When is the best time to visit Efteling?

Winter Efteling is a real winter Wonderland. As if the whole park puts his winter clothes on – all attractions get special winter decoration. There’s artificial snow and you can warm up your hands at the bonfires at each square. There’s this cheery wintery atmosphere everywhere. Although some of the rides aren’t open in winter (like the Piraña or the Flying Dutchman), there is a huge skating rink at the Ice Palace, as well as daily entertainment shows.

I love how they perfection details at the Efteling. For example, all street lights get icicles hanging from them, the young goats from the The Wolf and the Seven Young Goats get winter pullovers and wrapped in shawls and there are tiny skis propped outside on the house, the bird in the front of the Bird Rok dark ride gets a shawl and a Santa hat.

And when it does snow on those rare occasions in the Netherlands, there isn’t a place more magical than the Efteling. Then you can see how real and subtle the winter decoration actually is – nothing over the top, as it naturally blends with the snow.

New Year’s Eve at the Efteling

The most magical New Year’s Eve I have ever spent was at the Efteling. With the bonfires lighting the squares at night and the smell of mulled wine and oliebollen, the Efteling turns into a fairy tale came alive. On New Year’s Eve the park is open till 1 am and you can visit all attractions that are open in winter. There’s live entertainment and some of the attractions get a special 3D mapping show projected on them. At midnight the most enchanting of all fireworks will lead you into the New Year promising plenty of magical moments in your life ahead.

A typical Dutch tradition for New Year’s Eve is the oliebol – a deep-fried kind of doughnut (without a hole) with icing, which has to be eaten warm. A special kind of oliebol are those with raisins. I can’t remember a New Year’s Eve in the Netherlands without oliebollen, so don’t forget to try them at the Efteling at the New Year’s Eve.

Summer Festival at the Efteling

In the summer (July and August) the park is open till 8 pm and on Friday and Saturday till 11 pm when the Summer Festival (Negen Pleinen Festijn) is celebrated. During the Summer Festival there are many special events, live entertainment, street theatre performances and a food street with Dutch summer delicacies.

Most famous attractions and Efteling rides

On the website of the park you can find extensive information about all attractions and rides in the Efteling. Here’s a list of my favourite ones:

Buy your tickets for Efteling here!

Where to stay near Efteling?

Click here to go directly to my complete guide to the hotels near Efteling.

As I have already mentioned, one day is pretty much insufficient for Efteling, especially if you want to see everything. Then why hurry and not take a hotel for one or two nights even. If you decide to stay longer at the Efteling, there’s plenty to do in the region. The theme park is bordering with two Nature Parks – the beautiful National Park Dunes of Loon and Drunen and Huis ter Heide. Besides, you can visit one of the big cities located nearby – Den Bosch (‘s-Hertogenbosch), Tilburg or Breda.  Another lovely day-trip could be the little walled town Heusden. Whatever you choose: overnight stay, weekend escape or a small holiday, you won’t be disappointed.

You can stay either at the Efteling’s own accommodations: Efteling Hotel, Bosrijk or Loonsche Land, or in the nearby villages Kaatsheuvel, Sprang-Capelle, Loon-op-Zand.

Read: My complete guide to the hotels near Efteling. It contains recommendations for the best places to stay within a walking distance from the park, as well as some other great suggestions.

Want to visit Efteling? Pin this for later! 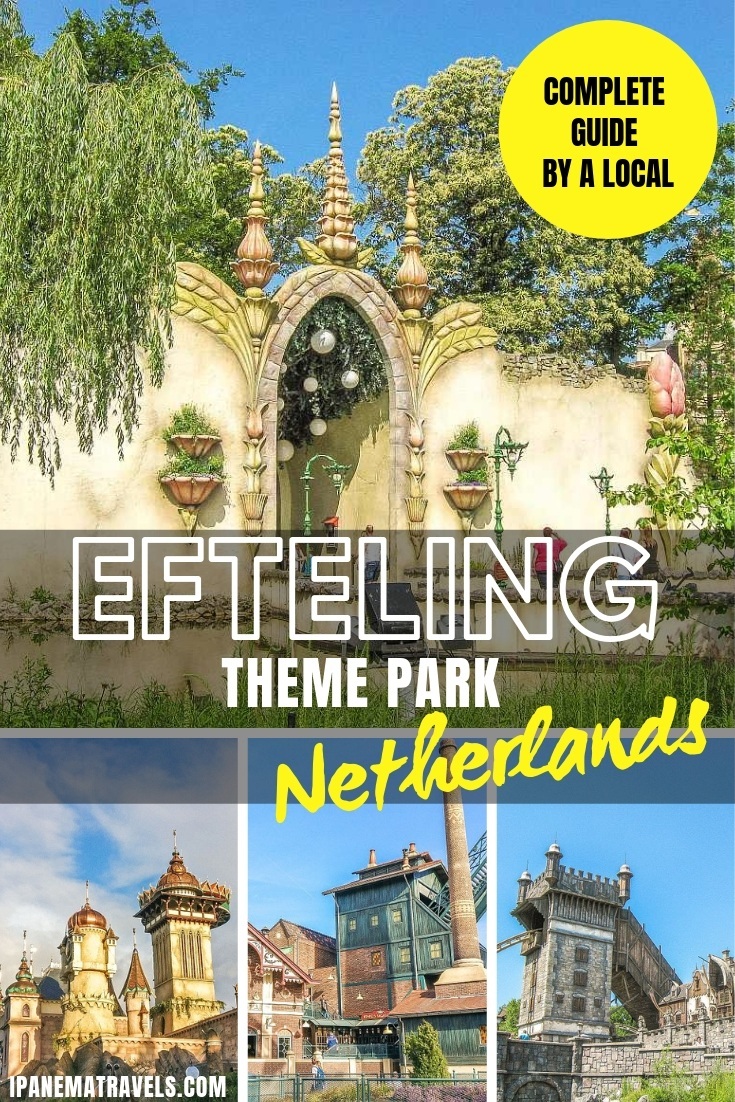 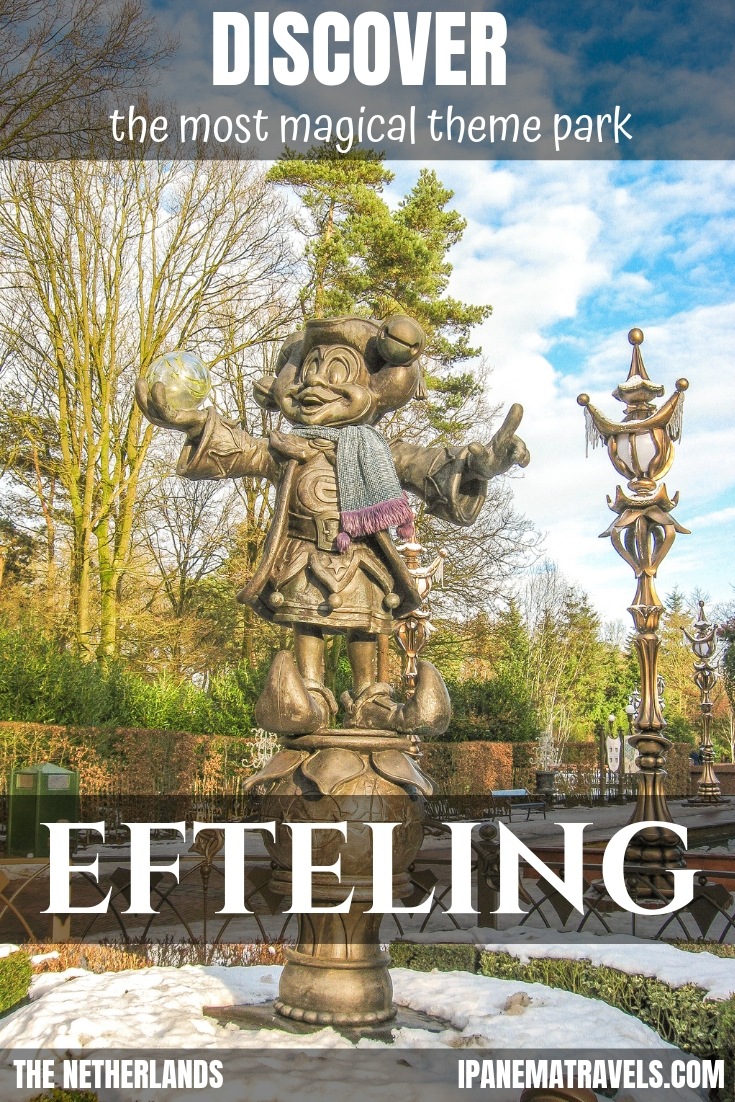 Have you been to the Dutch theme park Efteling? Which is your favourite ride? Are considering visiting Efteling and have questions? Ask them below in the comments and I will help you.