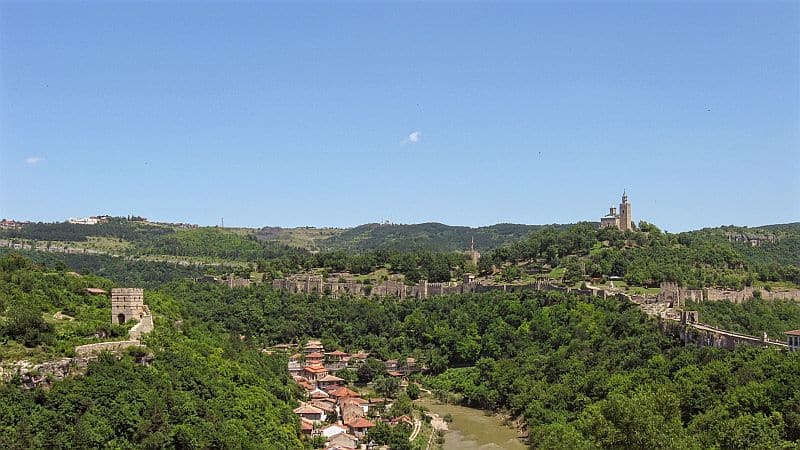 There aren’t many castles and fortresses left in Bulgaria, but it doesn’t mean that they have never existed. It just happened that they hadn’t survived the present day. However, there’s one place in Bulgaria that collects in one all the past glory of this country in the Middle Ages, and this is Tsarevets – the stronghold of the Second Bulgarian Kingdom (12th – 14th century).

DISCLOSURE: This post contains affiliate links. If you purchase one of the products via these links, I may earn a small commission at no extra cost for you. Thus, you are helping me to pay for the hosting of this blog, for example. This is not a sponsored review and I have paid the entrance fee to this attraction by myself. All opinions are mine.

How to get to Tsarevets

I would recommend that you stay a few days in Veliko Tarnovo. It’s a really nice city with beautiful views and interesting places to visit. If you need a hotel, it could be quite overwhelming to choose the right place – near Tsarevets or outside of the city. I’ve lived for 13 year in this city and can recommend you the best places to stay in Veliko Tarnovo. Make sure you read my hotels guide.

Tsarevets Fortress with the Patriarchal Church on top of the hill and the King’s Palace, where the Bulgaria flag is waving.

If you are coming to Veliko Tarnovo only for a day to visit the fortress, parking in the city can be overwhelming. It’s actually a nightmare, to be completely honest. So, I would advise you to use the parking that’s in the foot of the hill where the fortress is located. The address is ul. “Kraybrezhna” 43.

If you are staying for a longer time in the city, the best way to reach Tsarevets is by walking. Thus, you will also see Veliko Tarnovo and enjoy its architecture from the Bulgarian Revival Period (18th – 19th century).

Although you can reach the fortress, admire it from the square in front, get a few pictures and hop on your car to your next adventure, I highly recommend visiting the fortress. You will learn a lot about the history of this place and Veliko Tarnovo and get some pretty amazing views of the city from the top of the hill.

You can buy them at the entrance. Price is 6 BGN (about 3 EUR). If you are still at school or a student, you pay only 2 BGN (about 1 EUR). There are also some combination tickets for Tsarevets and Trapezitsa and other historical sites. You can check these at the Tourist Information Centre or at the entrance of each museum/historical site in Veliko Tarnovo.

What to expect from Tsarevets

The fortress with the surrounding ramparts has been continuously in restoration since the 1960s. The Patriarchal church, the Baldwin Tower and the two gates are completely restored today. During the excavations there were found 470 residential buildings, 23 churches, 3 monasteries and an inn.  When visiting Tsarevets, make sure you are wearing comfortable shoes, as visiting the fortress involves some degree of hiking on cobbled pathways. From the Patriarchal Church you have this beautiful view over the city. The frescoes in the church are modern and not among my favourite ones. The gloomy colours contribute to a very depressed feeling. If this was the intention of the artist, he had succeeded in it.

The recently renovated square in front of Tsarevets Fortress. If you wonder what those eggs are doing in the basket – for Easter according to the tradition they paint eggs in different colours in Bulgaria.

Why should you visit the fortress

If you a mindful tourist that is eager to learn about the past of a country you are visiting, or you are a history geek that’s been bitten by the travel bug, Tsarevets is the perfect attraction to include on your sightseeing tour of Bulgaria. Tsarevets is the stronghold of the Second Bulgarian Kingdom (12th – 14th century) when Tarnovo was its capital. Well, you can be none of these and I still recommend you visiting this place, as it has this special charm and uniqueness and there are some lovely views on the surrounding hills and the picturesque city of Veliko Tarnovo.

Most people don’t know that Bulgaria was one of the super powers in Europe in the Middle Ages, always questioning the dominance of the Byzantine Empire and later the Latin Empire. The Second Bulgarian Kingdom existed between 1185 and 1396 occupying the territories on the Balkan Peninsula between the Black Sea, the Aegean Sea and the Adriatic Sea. Under the Assen Dynasty (the kings that ruled Bulgaria in those ages) Tarnovo was called the “Third Rome”, being an important hub of Medieval architecture, literature and art. The two most significant schools of those days are the Tarnovo Artistic School and the Tarnovo Literary School. The first one set the trends in the medieval painting and the second one gave some major religious and secular literary works.

This photo can be considered a bit outdated, as they had recently renovated the square in front of the fortress. Still a beautiful view to the city and the Cathedral.

The legend of Baldwin

Tsarevets doesn’t come short of legends, if you like stories about knights and crusaders, love and treachery. One of the legends says that the First Emperor of the Latin Empire – Baldwin I, defeated by the Bulgarian King Kaloyan, was kept a prisoner in one of the towers in the fortress. The queen fell in love with the prisoner and the king ordered the execution of the Latin Emperor. Another legend says that Kaloyan has made a wine goblet out of Baldwin’s skull. One of the towers today is called the Baldwin Tower, although there’s no evidence that Baldwin was kept prisoner there if at all being imprisoned in Tarnovo.

Opposite the Baldwin Tower, on the other side of the hill, there’s the Execution Rock. The story goes that the traitors were thrown from this rock into the Yantra River. Just be careful when taking selfies there, as it is a dangerous place.

Not only during the day is Tsarevets a tourist attraction, in the evening you can enjoy the Light and Sound show on the fortress – lasers, colourful lights and dramatic music. The show is played free of charge on bank holidays and can be enjoyed from the square in front of the fortress. You can check here the days when the show will be played, so that you can buy tickets.

Pin this for later!

Have you been to Veliko Tarnovo and have you visited the fortress? Did you know that Tsarevets is one of the most popular attractions in Bulgaria among the locals? What is your most favourite place/attraction in Bulgaria?