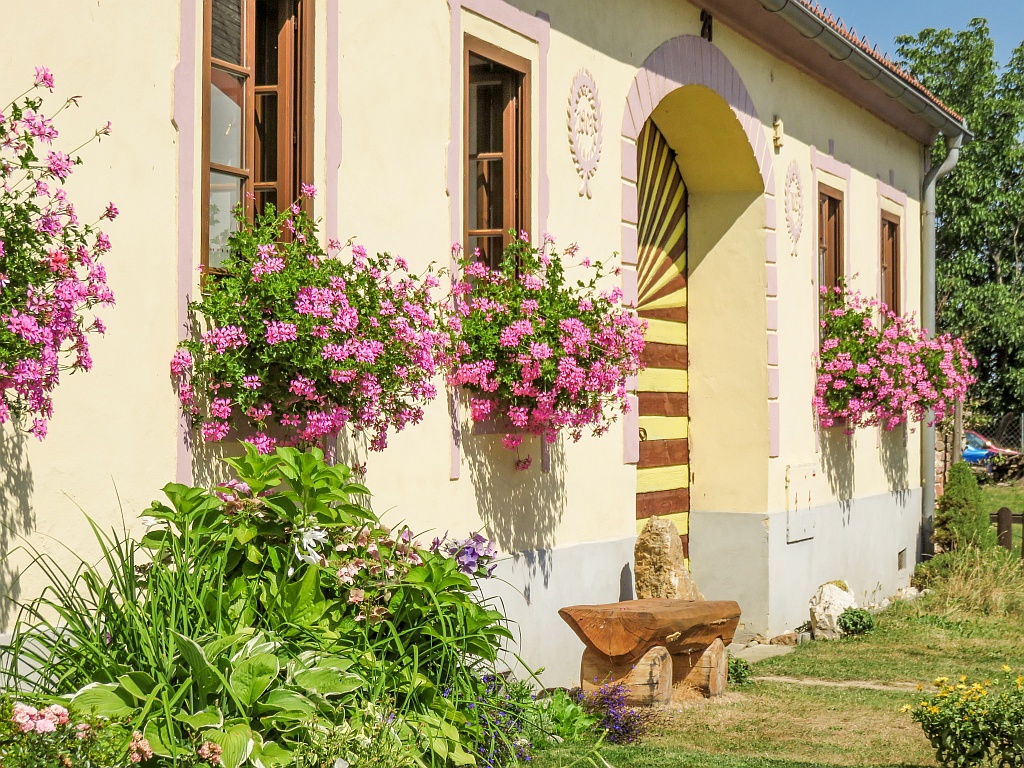 Abandoned after WWII and repopulated again in the 1990s this tiny village has something unique that you can’t find anywhere in the world. Its architecture is so special that Holašovice made it to world fame with its registration as a UNESCO World Heritage Site in Czech Republic. Travelling in Czech Republic or South Bohemia? Holašovice should be on your bucket list. Read further to find out what’s so special about this places and why Holašovice became a UNESCO site.

Read here why you should visit Holašovice when travelling in Czech Republic.Click To Tweet 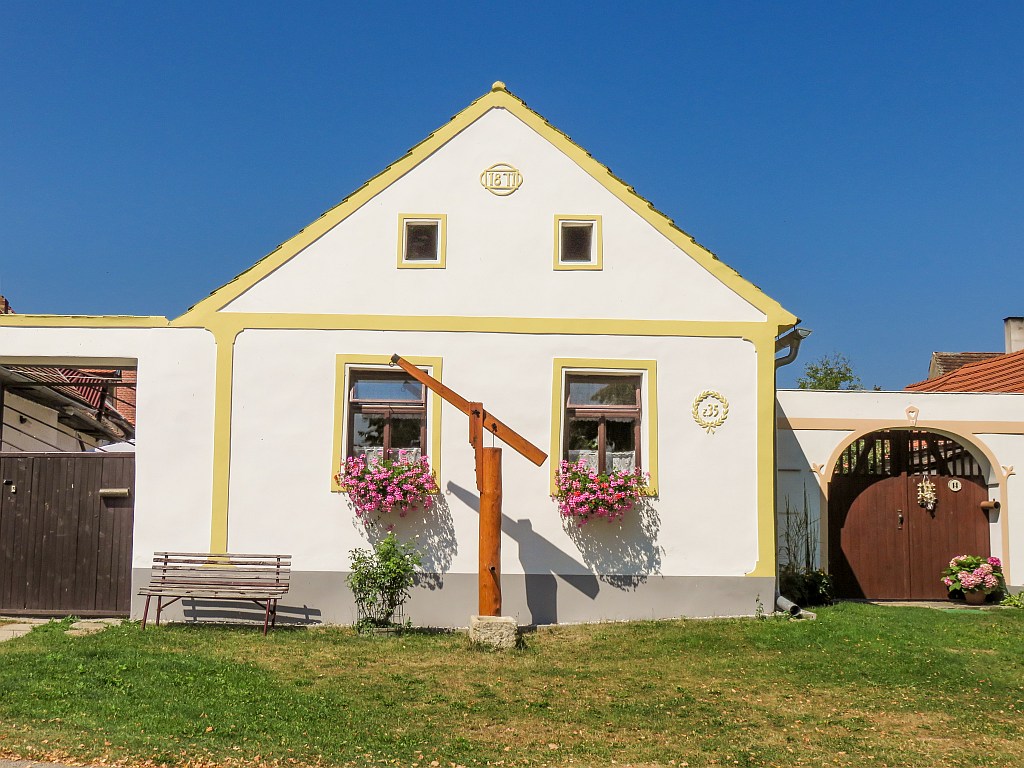 What is so special about the tiny Holašovice?

The village is tiny, so tiny that you can see the whole of it standing at one corner of the village. There are only 23 houses and 140 people living there. And still this petite village in South Bohemia has made it to the world scene. In 1998 Holašovice was registered on the List of the UNESCO World Heritage Sites in Czech Republic for its unique and beautifully preserved 19th century South Bohemian Folk Baroque architecture. 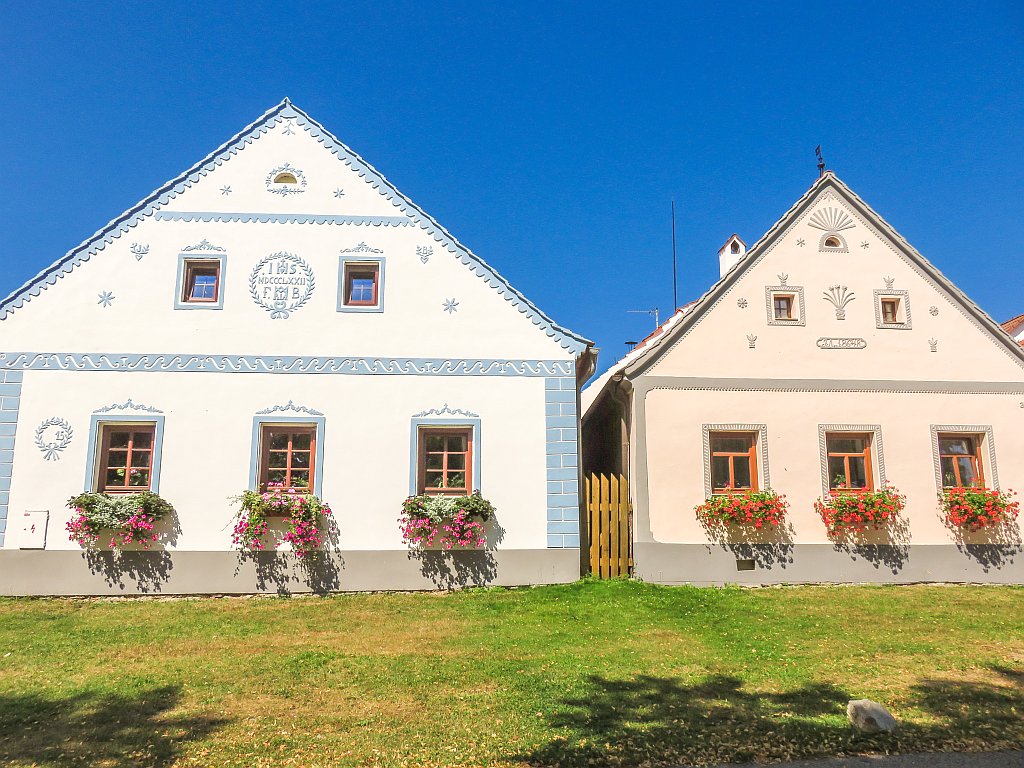 What is Folk Baroque architecture?

Folk Baroque or Rural Baroque is an architectural style typical for the villages in Central Europe, and specifically in South Bohemia, which you won’t find anywhere else. It emerged in the 1820s and reached its height in the 1860s when the rural areas of Central Europe were thriving. The farmers were tearing down their wooden houses and barns and building more stable brick ones. The gables of the houses are beautifully decorated with volutes and other stylized ornaments depicting the owner’s initials or profession.

A bit of history…

For the first time the name of Holašovice was mentioned in the 13th century. The 16th century brought no go good to the small village, when only 2 people from the Czech-speaking population survived the plague of 1520. In the centuries thereafter, the village started to revive and was settled again by Bavarians and Austrians. In the aftermath of WWII, as all Germans were expelled from Czechoslovakia with a decree of the communist government, the place was deserted.

After being for almost half a century a ghost village, in the 1990s the village was restored and repopulated again. Although there’s a dark side attached to the history of Holašovice, it helped the place to survive the communist regime without being destroyed and turned into a model co-operative socialist village, or whatever they might have come up with. 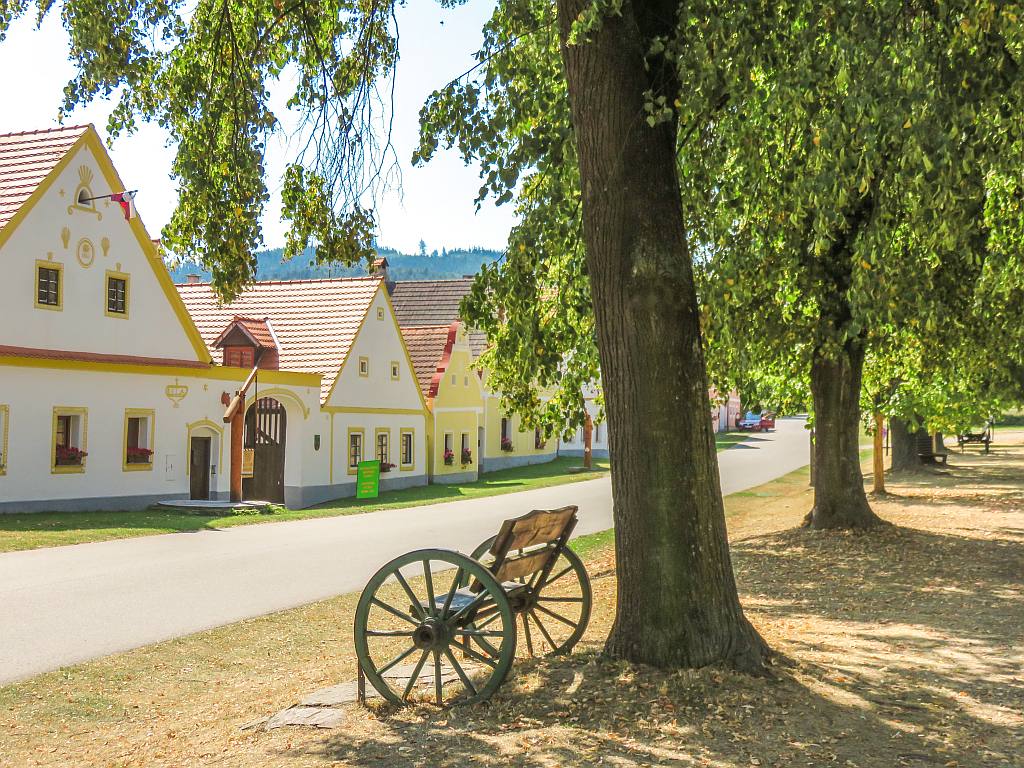 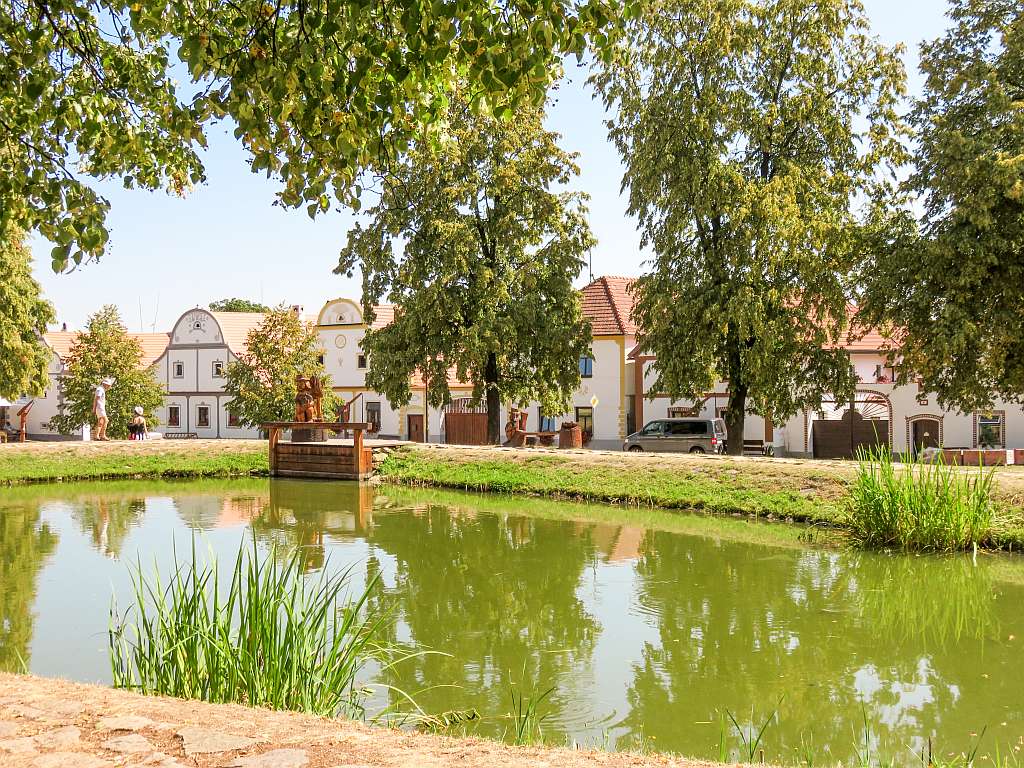 Things to do in Holašovice

When you arrive in Holašovice, I strongly recommend visiting the Tourist Information Centre. There’s a small ethnographic exhibition there and old pictures of how the place looked like before the restoration. There’s also a miniature model of the village, which will give you an idea of how big actually the farmsteads are. From the street we can only see the beautiful ornamented facades, but behind them there are barns and sheds and residential parts. All farmsteads are connected with each other on the street side with walls and gated entrances and are facing the village green. There’s a small chapel and a pond. Unfortunately, you can’t visit the farmsteads, as there are people living there. However, one of the farmsteads is turned into a museum (Selský dvůr at No. 6), which is open for public.

There isn’t much to do in the village, so I would I recommend planning about 2 hours for your visit, unless you decide to grab a bite at one of the two restaurants in Holašovice – Jihočeská hospoda at No. 18 (low season open only for dinner) or Špejchar u Vojty at No. 19.

How to get to Holašovice?

If you are travelling around by car in South Bohemia, Holašovice is only at 17 km from České Budějovice, so you have to include it on your itinerary. 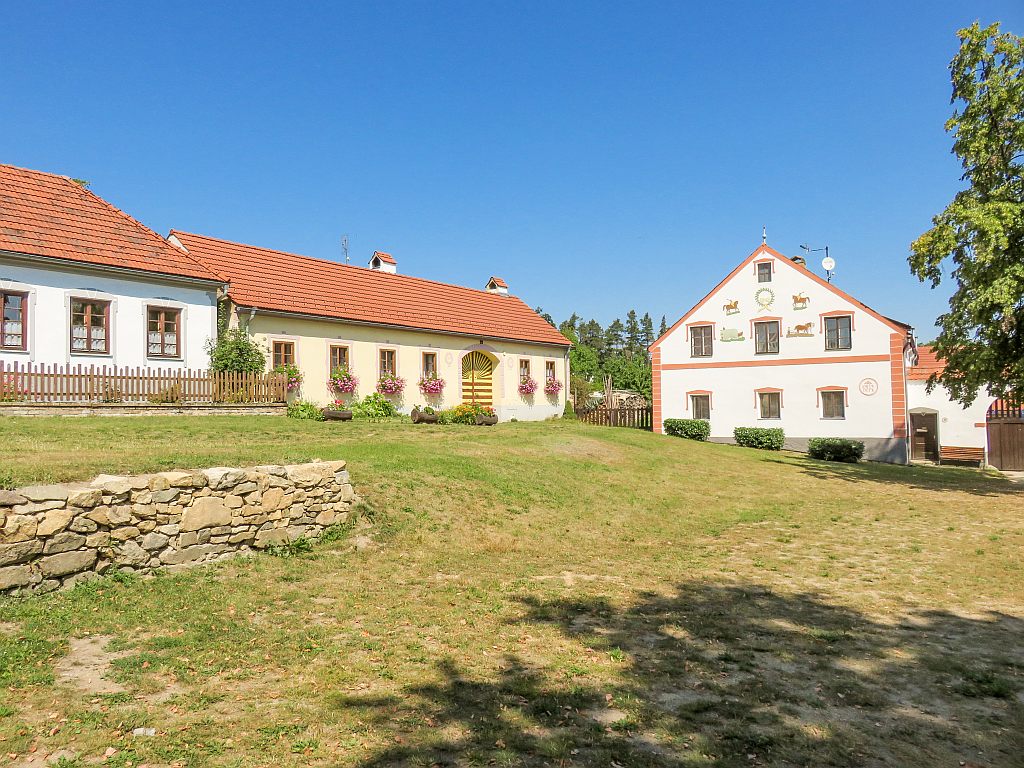 Are there other places with Folk Baroque architecture?

Holašovice, however, is not the only village in South Bohemia where you can admire the Folk Baroque. There’s a whole lot of them, but Holašovice is the best preserved one. When we were travelling around in South Bohemia, we’ve stopped also in Plástovice and Malé Chrášťany. Two absolutely adorable places, without the glossiness of being UNESCO heritage sites, a bit weathered, but so real. And that’s not all. There are a few more villages in the so-called PodKlety region where the typical South Bohemian Folk Baroque is preserved – Vodice, Záboří, Břehov, Čertyně, Dobčice, Krnín, Lipanovice, Mahouš, Rojšín, Třešňový Újezdec, Vitějovice, Zbudov, Zvěřetice.

Isn’t that a great idea for a road trip?

Where to stay in Holašovice?

You would be surprised but you can still stay for the night at Holašovice. Do you remember the restaurant I mentioned above Špejchar u Vojty? They also have a pension.  So, why not spend a night there?

Check here for the availability and prices of Špejchar u Vojty.

DISCLOSURE: This post contains affiliate links. If you book your hotel using the link above immediately after you have visited my page, I will earn a small commission at no extra cost for you.

I visited Holašovice and the villages Plástovice and Malé Chrášťany as a part of a press trip organized by the South Bohemian Tourism Board on invitation by Czech Tourism, where all accommodation, meals and activities were provided by the Tourism Board and their partners. However, all opinions expressed in this post are mine.

Already in love with Holašovice? Pin this post for later! 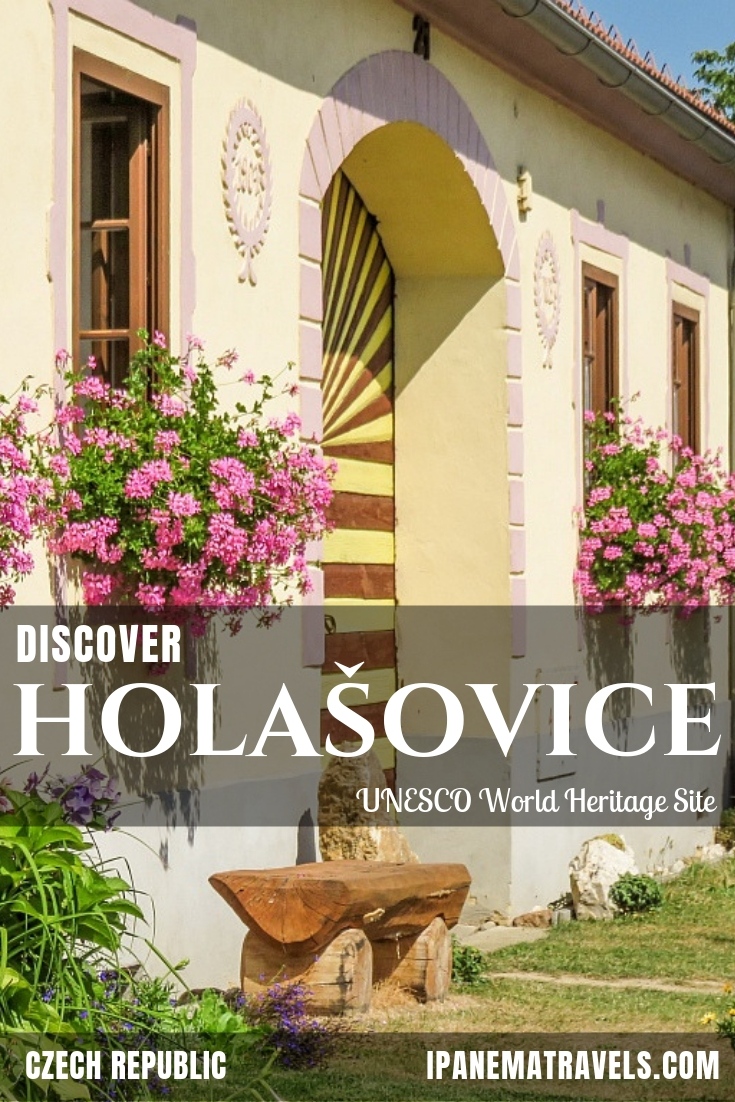 Have you visited Holašovice? What do you think about it? Share your experience below in the comments! Questions? No, worries. Ask them and I will try to help you.

1 thought on “Holašovice – from Ghost Village to World Fame”