If you are staying in Venice for a couple of days, you might want to explore the Veneto region. Do you want to go on a river cruise and see one of the most luxurious villas in Italy? Do you want to explore another beautiful city in Italy – Padua? Then you should take a boat trip on the Brenta Canal to Padua – one of the best day trips from Venice and river cruises in Italy!

We did this boat trip the other way round: we started in Padua and ended in Venice. It doesn’t matter actually which way you’ll do it, you will still visit all beautiful villas along the canal.

We thoroughly enjoyed the day spent cruising along the Brenta: slow travelling under the gentle sun, combined with alternating views of majestic mansions, small towns, weeping willows and green farmland.

DISCLOSURE: This post contains affiliate links. If you purchase one of the products via these links, I may earn a small commission at no extra cost for you. This is not a sponsored post and I have paid for the cruise myself. All opinions are mine.

How to book the Brenta Canal Cruise?

The Brenta Canal Cruise is a one day trip either from Padua or from Venice and is available between March and October.

The price is inclusive of guided visits to the villas and the lunch can be booked separately, or you can take care of it yourself. The boat stops at Oriago for lunch. We booked the tour with the lunch option and we were not disappointed at Il Burchiello. The service was very quick, although they had to make sure that all 40 something tourists had their lunch at the same time, and the food was also enjoyable.

The Brenta Canal Cruise is the perfect excursion from Venice if you are staying there for a couple of days.Click To Tweet 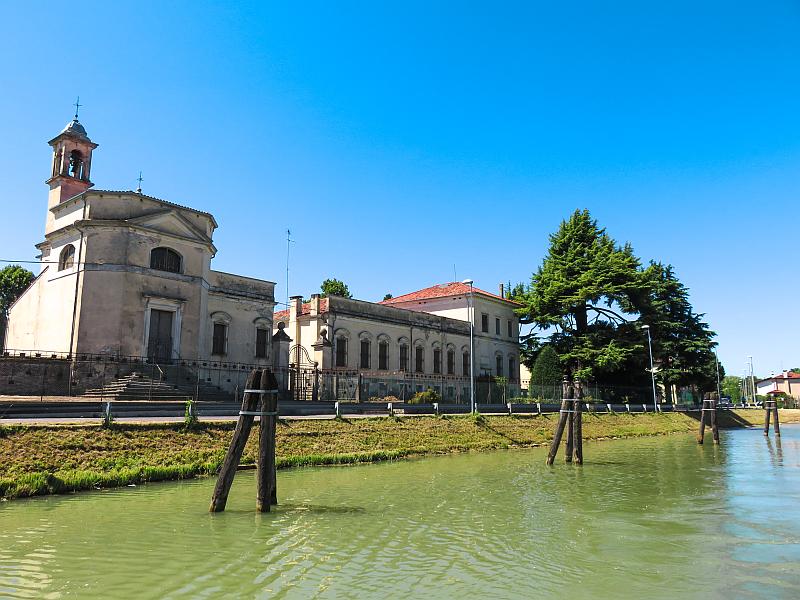 Along the Brenta Canal in Italy – gorgeous villas and sleepy towns – the perfect day trip from Venice for the slow traveller! 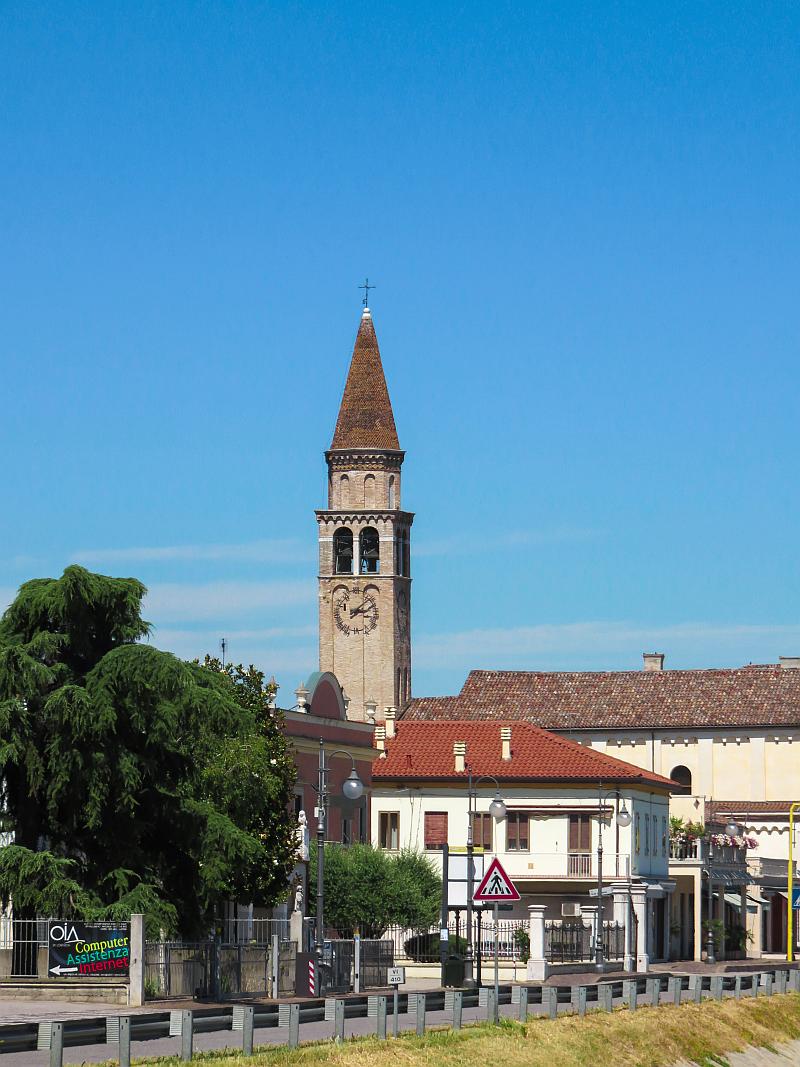 The bell tower of Santa Maria Maddalena in Oriago – our stop for lunch on the day cruise.

Brenta Canal? What’s so special about it?

The Brenta Canal (Naviglio del Brenta) is a waterway that connects Venice (Venezia) with Padua (Padova). The part from Fusina in the Venetian Lagoon to Strà is a branch of the Brenta River that was corrected. The part from Strà to Padua is a 10-km canal dug in 1209 to connect Padua with Venice, known as the Piòvegio Canal. In the height of the Venetian Republic (La Serenissima) this was a busy waterway – on one hand it was connecting the University City of Padua to Venice and all the trade would go via the water, on the other hand it offered a summer escape for the wealthy Venetians who built sumptuous villas alongside the Brenta Canal. One of the 9 swing bridges on the Brenta Canal. We need to wait until it’s open.

In those days the transportation was carried out by barges pulled by horses, called burchiello. Today, the Brenta Canal is used only for leisure and the modern burchielli carry tourists between Venice and Padua.

To correct the difference in the water level and to make possible going both upstream and downstream, there were built 5 locks which act as “water lifts”. The boat enters the lock and the back gate closes, then the sluice in front opens and equalizes the water levels, thus enabling the boat to go up- or downstream without much hassle. It was pretty impressive to see how these water locks work in real. One of the water locks on Brenta Canal. The gate will open and our boat will get trapped in the so-called “water lift” and we’ll go up or down a few meters depending on whether we are cruising up- or downstream. Pretty amazing to see it working!

There are also nine swing bridges that are still operated by hand. The boat stops in front of the bridge and it is winched away and the boat continues its course until it reaches the next lock or swing bridge.

Tip: No matter if you will start your trip at Venice or you will end it there, the city is absolutely amazing, seen from the water! It doesn’t matter whether you are arriving at or departing from Venice – one of the most stunning views of the city are from the water!

The villas along the Brenta Canal

When you take the cruise, it is inclusive of visits to three of the villas along the Brenta Canal, that are open for visitors: Villa Foscari, Villa Widmann and Villa Pisani.

The famous villas along the Brenta Canal (about 100) are actually summer residences of the wealthy families who wanted to escape the muggy Venetian summers. They were designed by some of the most famous architects of the time: Palladio, Scamozzi, Frigimelica, and frescoed by equally great artists Gianbattista Tiepolo, Benedetto Caliari, and Zelotti, just to name a few.

Spending the summer holidays at the villa (called “villageteria”) led soon to a frenzy, where big parties were organized on the burchielli, stopping at the villas on the way for even more entertainment, drinks and food. These Venetian “villa crawls” (analogical with the modern pub crawls) became a real mania from the 15th throughout to the 18th century and ended eventually with the fall of the Venetian Republic in 1797 after the arrival of Napoleon.

Fun fact: A cruise on the Brenta Canal was part of the Grand Tour – a big tour around Europe, popular from the 17th to 19th centuries. Wealthy young men and women would venture on this trip of a lifetime at the age of 21, which was considered also a rite of passage. Well, the world hasn’t changed much, and nowadays gap years are more popular than ever, expanding the horizons of the young and not-so-young even way beyond Europe.

The villa was designed by Palladio for the brothers Nicolò and Alvise Foscari in the second half of the 16th century and is one of the most beautiful examples of the Palladian architecture. The frescoes are by Battista Franco and Battista Zelotti, who had worked with Veronese on various projects. The Palladian Villas in Veneto, one of which the Malcontenta are a UNESCO World Heritage Site. The beautiful villa Foscari designed by Andrea Palladio – one of the most famous 16th century architects in Europe.

We were impressed by the symmetry and the classical beauty of this villa. The villa consists of three floors: the ground floor is reserved for the functional activities, the first floor (the so-called piano nobile) was for the “noble” activities with 2 symmetrical apartments, each consisting of 3 rooms. The second floor was used as a storage for agricultural goods.

The villa was named La Malcontenta as according to the legend the Foscari’s wife was exiled there for improper behaviour.

Today, the villa is owned by descendants of the Foscari family, but nonetheless it is open for the public. 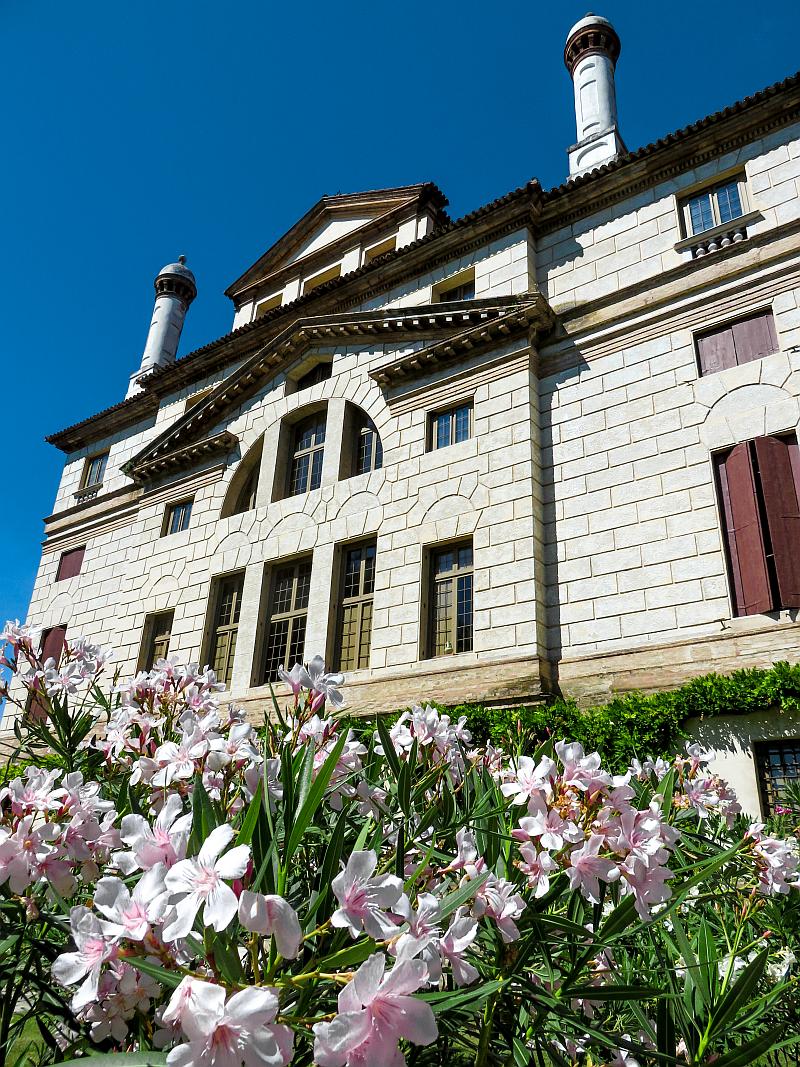 The equally gorgeous backside of La Malcontenta. There is a very well kept park adjacent to the villa, take a stroll and enjoy the symmetrical beauty! One of the party villas along the Brenta Canal – the famous Villa Widmann.

The next stop on the Brenta Canal Cruise is Villa Widmann. It was built in the early 18th century for a Venetian noble family of Persian origins. Later the villa was purchased by the Widmann family and totally renovated in the French Rococo style, popular those days. When you enter the villa you can’t notice the gigantic chandelier of Murano glass. The ball room is richly decorated with trompe l’oeil frescoes – all architectural features (columns, friezes and cornices) are actually painted in an optically deceiving way. 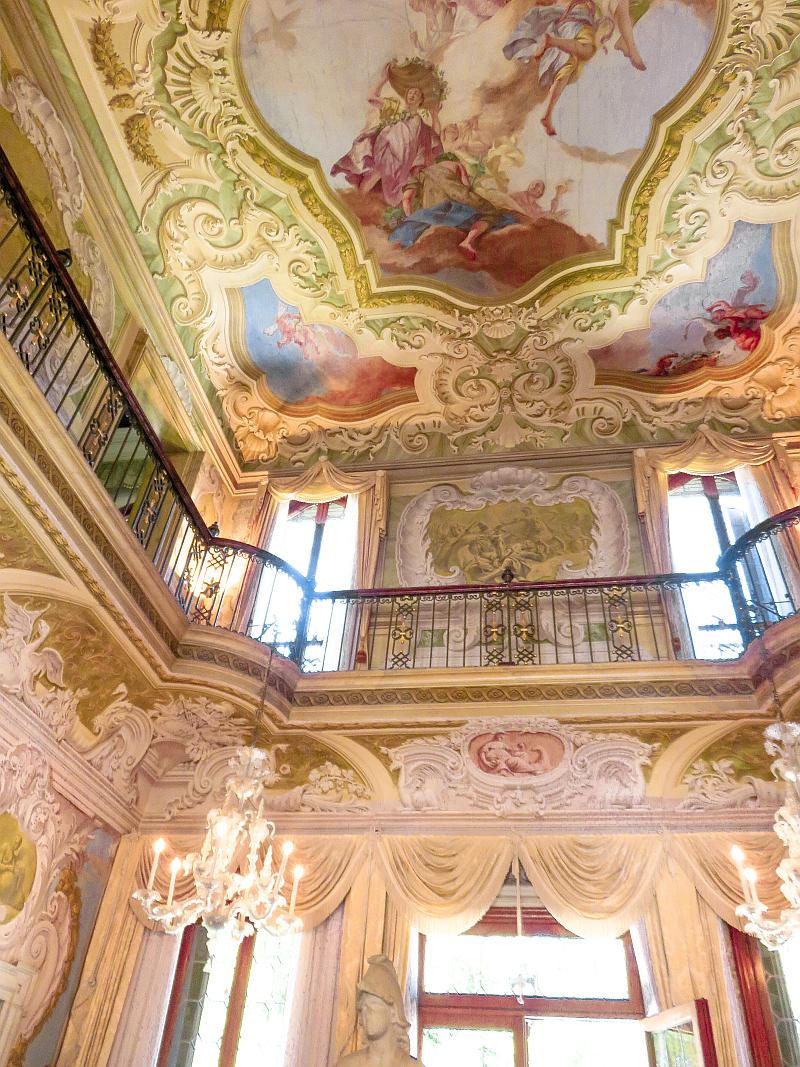 The richly decorated in Rococo style ballroom at Villa Widmann. 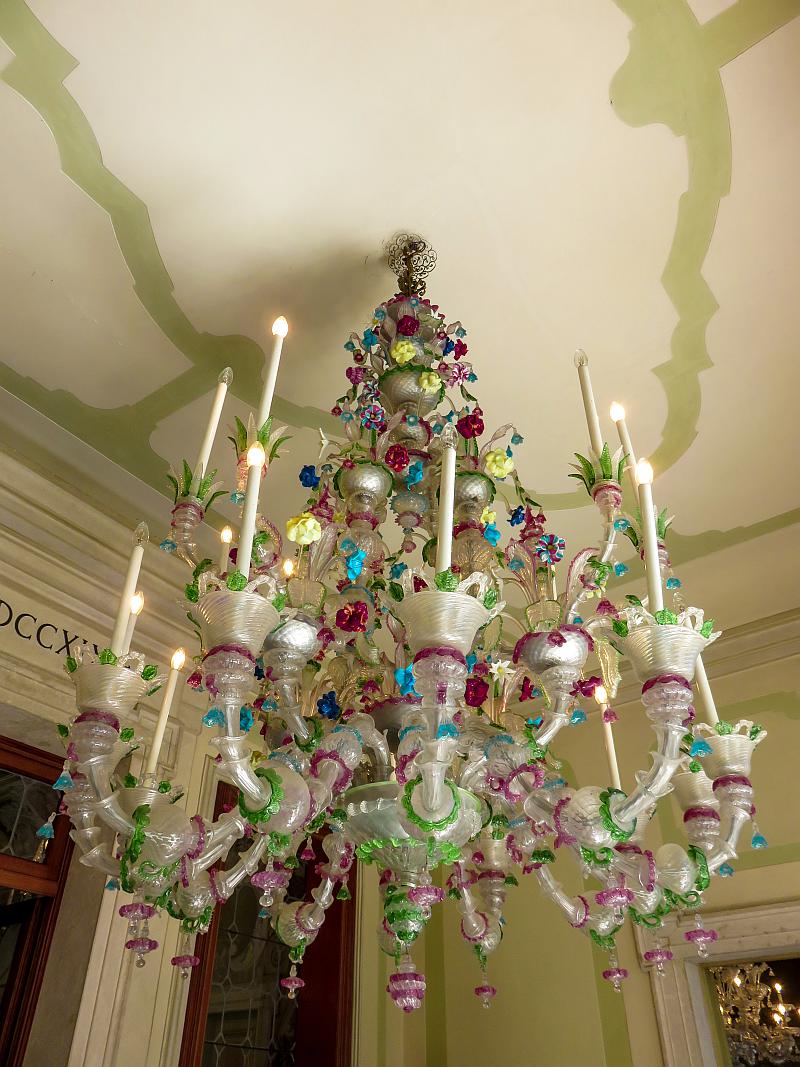 The famous chandelier of Murano glass, made by Giuseppe Briati in the 18th century.

The Villa has a beautiful garden with a circle of statues: gods, nymphs and cupids. In the barchessa (a porticoed outbuilding) belonging to the villa, there is an exposition of old carriages. The beautiful park of Villa Widmann with the circle of statues.

Villa Pisani is the most grandiose of all villas, a fine example of 18th century Baroque. It was commissioned by the rich Pisani family to commemorate the election of Alvise Pisani as the 114th Dodge of Venice in 1735. Therefore, in the original villa there were exactly 114 rooms. Villa Pisani features also a gigantic fresco on the ceiling in one of the rooms painted by Gianbattista Tiepolo – “Glory of the Pisani family”. 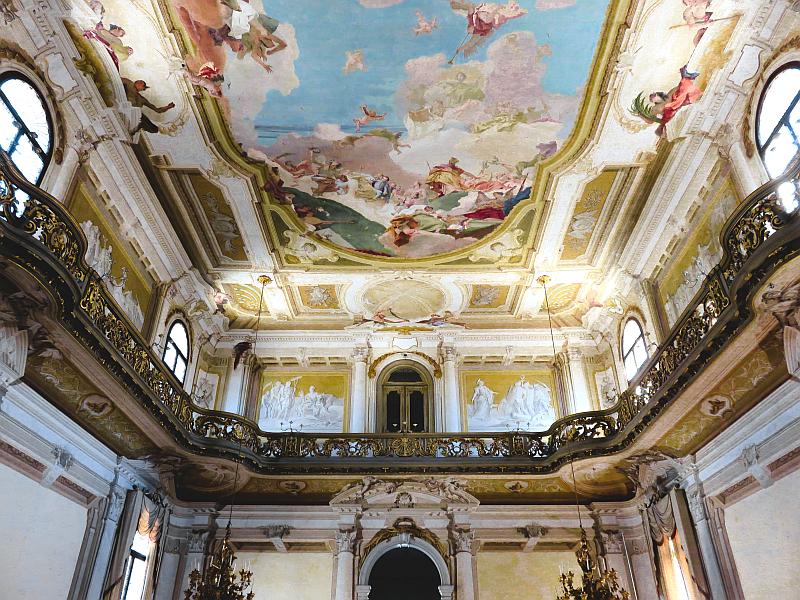 The ballroom at Villa Pisani with the famous ceiling fresco by Gianbattista Tiepolo – “Glory of the Pisani Family”.

Well, the glory didn’t last forever and after the Pisani family lost all their money on gambling, they sold the villa in 1807 to Napoleon, who gave it to his stepson Eugène Beauharnais. After Napoleon was defeated in Waterloo in 1814, the villa ended in the hands of the Habsburg family who made out of it holiday places for the 19th century aristocracy. After the annexation of Veneto to the Kingdom of Italy in 1866, the villa became a property of the State.

The most famous room in the villa is the Napoleon’s apartment that features ensuite bathroom with a recessed bath – the ultimate luxury those days. 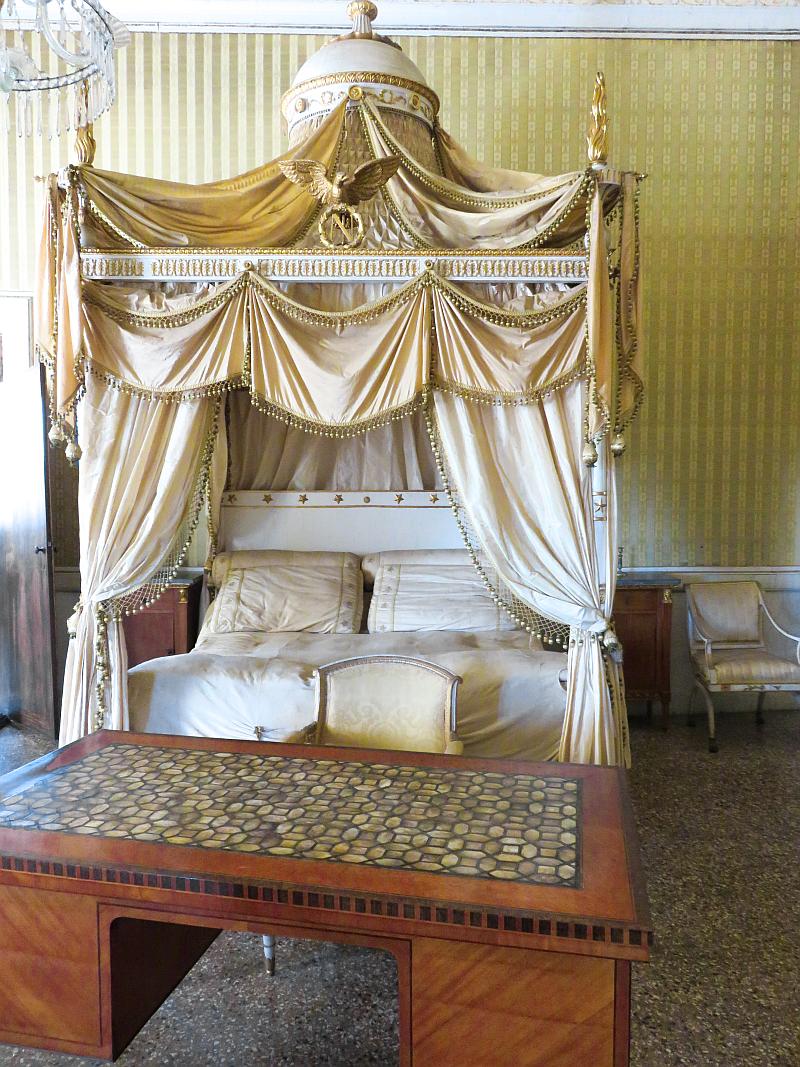 The famous four-poster bed of Napoleon with his emblem. Too bad he spent only one night at the villa. Or at least this what they say. The ensuite bathroom with the recessed bath at the Napoleon’s apartment in Villa Pisani. How cool should have been this?

The gardens are very beautiful and well kept. There is a long water channel that leads to the stable which façade is quite stunning for a façade of a stable. There are some artificial mounds, a tea-house and a maze. A part of the garden is covered by trees. 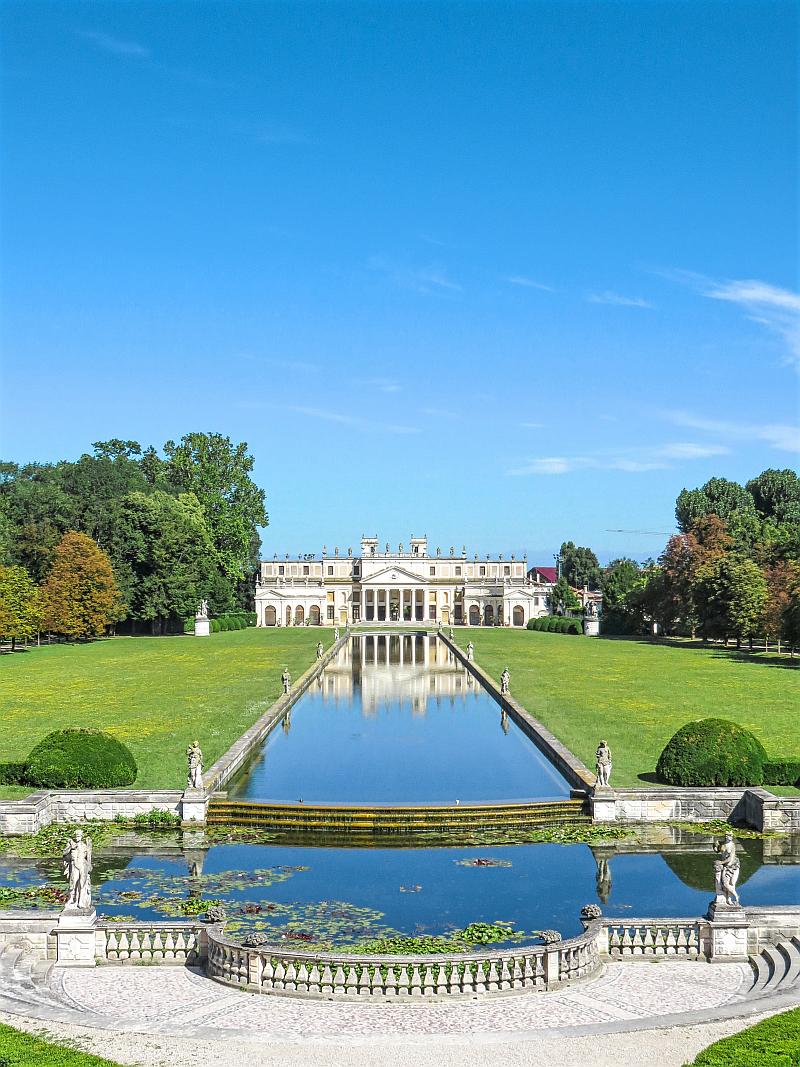 The false facade at Villa Pisani hiding the stables. Symmetry was everything those days!

Fun fact:  The villa, together with the gardens, occupy a whole bend of the Brenta Canal.

After Villa Pisani the trip ends in Padua. As you will arrive there in the late afternoon (around 7 pm-ish), I highly recommend spending a few hours walking around the city and enjoying its beauty. Make sure to check out the many squares in Padua: Piazza dei Signori, Piazza dei Frutti, Piazza delle Erbe, Piazza Eremitani and Prato della Valle – one of the biggest squares in Europe. Another must-see for a short visit to Padua is Il Santo – the Basilica of Saint Anthony of Padua.

Afterwards you can take the train back to Venice having spent a great day on this tour.

Read: Our 4-day itinerary in Padua with all attractions, featuring the Brenta Canal cruise.

Which is your favourite excursion from Venice? Have you done other day trips from Venice? Share with us your experience in the comments below!  You can also ask me questions about this boat cruise, I’ll be happy to share any tips on how to do the Brenta Canal Cruise.

Pin this for your next trip to Italy! 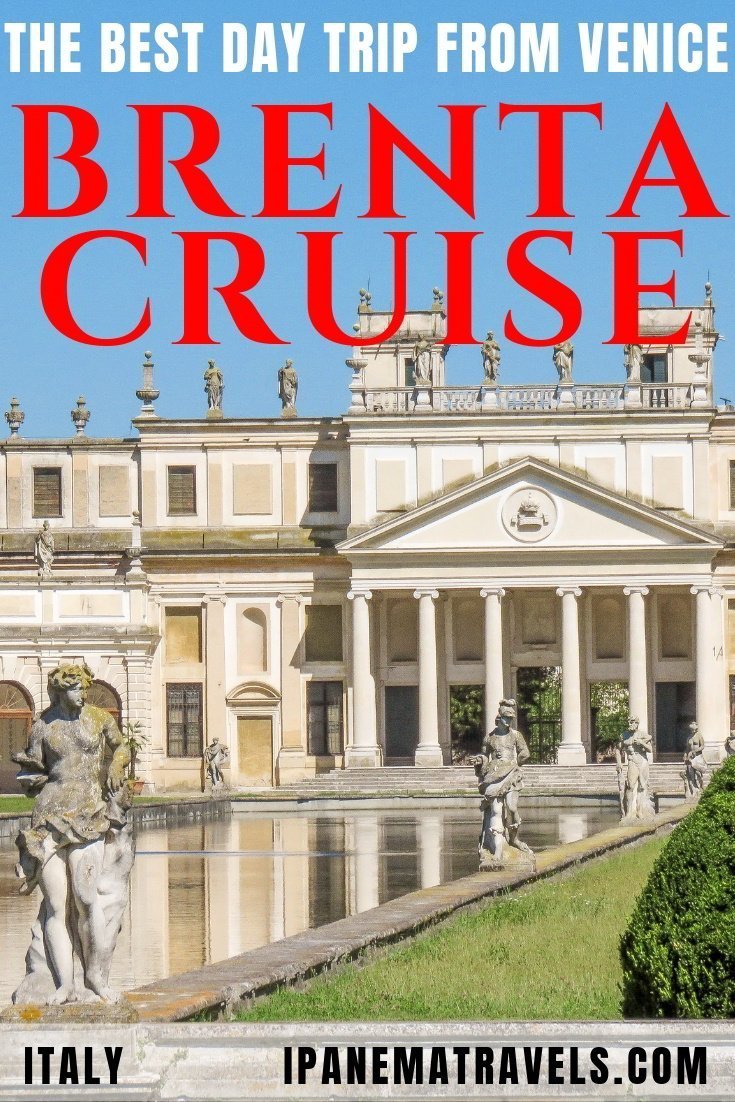 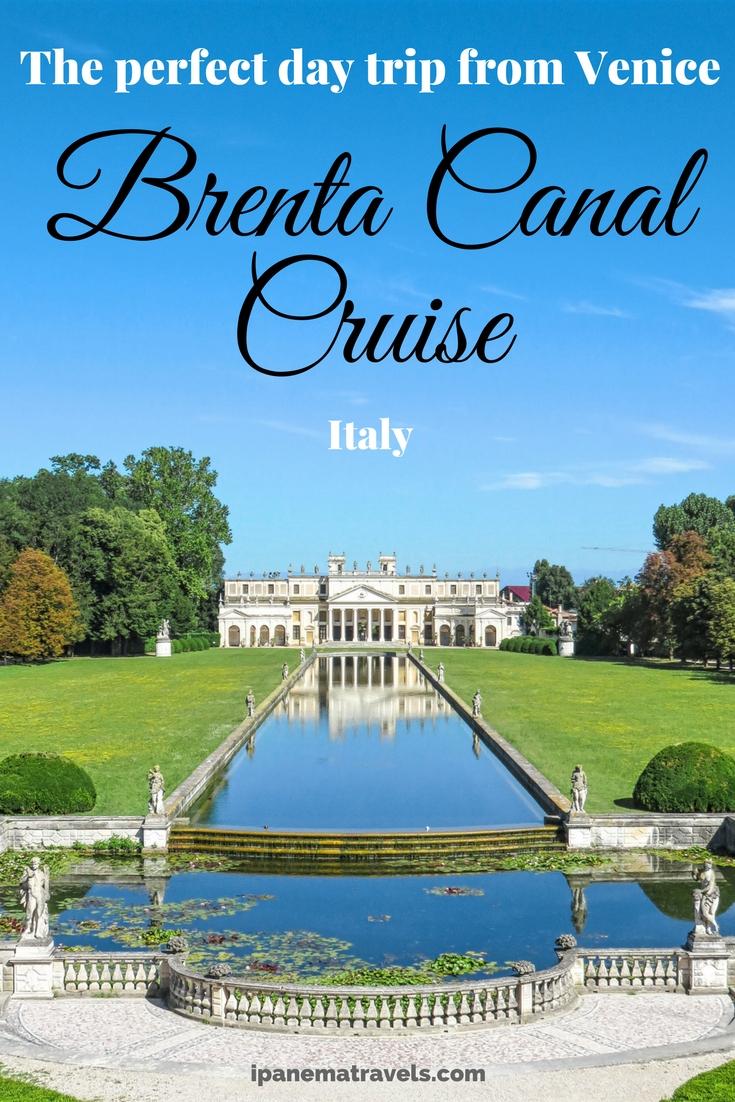