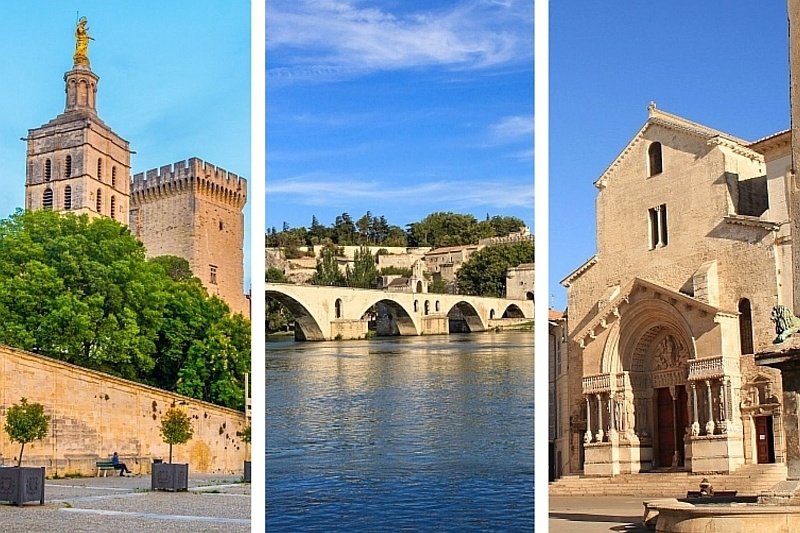 France is home to many beautiful regions, and Provence is no exception. Located in the south-eastern corner of France, bordering Italy and the Mediterranean Sea, the region of Provence-Alpes-Cote d’Azur has spectacular coastlines, gorgeous scenery, fascinating cities, and a rich history. There are three UNESCO World Heritage Sites located in Provence: the Roman and Romanesque Monuments of Arles, the Historical Centre of Avignon, and the Roman Theatre and Triumphal Arch of Orange. Each of these sites represents an intriguing part of Provence’s history and culture. Let’s take a closer look at these fascinating places!

This is a guest post by Joel, the author of World Heritage Journey. Joel will be contributing to a series of posts dedicated to less popular UNESCO World Heritage Sites in Europe. I am very happy, he agreed to share his amazing experience and knowledge with us. All tours and places to stay are recommended by Daniela, the author of this blog.

The Roman and Romanesque Monuments of Arles

The first UNESCO site in Provence we’re looking at is the Roman and Romanesque Monuments of Arles. As the name suggests, there’s two main aspects to this World Heritage Site which really highlight the story of Arles as a city.

The first aspect concerns Arles’ Roman history, when it was an important colony and trading post during the later stages of the Empire. As usual for important Roman towns, Arles boasted city walls, a theatre, circus, triumphal arch, baths, an aqueduct, and an amphitheatre. Although many of these are long gone, the ruins of several Roman buildings still remain.

The highlight here is definitely Arles Amphitheatre (Arènes d’Arles), built by the Romans in the late first century AD. Modelled after the Colosseum in Rome, it held a staggering 20,000 spectators who watched gladiator fights and chariot races. Interestingly, as the Roman influence in Arles declined, the Amphitheatre was repurposed into a fortress and housing district. Guard towers were built atop the walls, and thousands of houses were packed into the amphitheatre’s confines before their removal in the 19th century. Elsewhere in Arles, you’ll find the remains of a Roman theatre (théâtre antique d’Arles), the Cryptoporticos (les Cryptoportiques) (underground passages), and the Baths of Constantine (Thermes de Constantin).

The second aspect of the World Heritage Site in Arles are its Romanesque monuments, which date from its second golden age in the 11th and 12th centuries. Romanesque is a common style of medieval architecture, inspired largely by Roman archways (hence the name). The style has been used for royal palaces, humble houses, giant cathedrals, tiny chapels, and almost everything in between.

In Arles, the church of Saint Trophime (l’Église Saint-Trophime) is a spectacular example of Romanesque architecture. The main entrance portal is covered in Romanesque sculptures, depicting the Apocalypse, other Bible stories and various saints. It’s absolutely incredible, with fantastic detailing and exquisite workmanship. The inner cloister inside is also heavily decorated with yet more magnificent Romanesque art and architecture.

Know before you go
Arles is fairly easy to access from Marseilles, either via train or car. A combined ticket called Arles Patrimoine costs 16 euros and covers the major sites, including the amphitheatre, Roman theatre, cryptoporticus, cloister and more.

Avignon is a city of nearly 100,00 residents, located on the Rhone River in southern France. Thanks to a series of complicated political and religious manoeuvres, Avignon was home to seven consecutive Popes between 1309 and 1377. The Avignon Papacy, as it’s known, left a major legacy on modern-day Avignon, and the World Heritage Site in Avignon focuses on the history of that era.

The most impressive part is definitely the Palais des Papes, or Palace of the Popes. A colossal fortress of stone and brick, the Palace of the Popes is actually the world’s largest medieval Gothic building and has remained largely unchanged since its construction. Plain, simple, and unadorned, the Palace impresses with its bulk and strength rather than its decoration.

Tip: Book a walking tour of Avignon to see all UNESCO highlights.

Adjacent to the Palace is Avignon Cathedral (Cathédrale Notre-Dame des Doms d’Avignon), a Romanesque cathedral that actually predates the palace by several centuries. Like the Palace, it has a simple construction style, though the gilded Virgin Mary statue atop the bell tower (added in the 19th century) is a nice flourish. The stone is also surprisingly white, and can be quite blinding on a sunny day!

The third part of the Avignon UNESCO site is the Pont Saint-Benezet, better known as the Pont d’Avignon. It’s a medieval stone bridge that dates back to the 12th and 13th centuries, though much of it has been lost thanks to river floods over the centuries. Originally a series of 22 stone arches across the Rhone, today only the first four arches, a chapel, and a gatehouse remain. And although the bridge no longer goes anywhere, it’s still an excellent example of medieval bridge-building, and provides a great insight into what bridges from the Middle Ages were like.

Know before you go
Avignon is on the high-speed TGV train line between Paris and Marseilles, and is quite easy to reach. It’s also connected via major highways to France’s excellent road networks. The old town centre is very small and can be easily traversed on foot, while the Palace, Cathedral and Bridge are all adjacent to each other. Admission to the Popes’ Palace is 12 euros, Bridge tickets are 5 euros, and a combined Palace+Bridge ticket is 14,50 euros. Entry to the Cathedral is free, though be sure not to disturb regular services with your visit.

Orange is a small town located about 20 kilometres north of Avignon. Founded by Roman soldiers around 35 BC, the modern town of Orange still has its Roman origins on full display, thanks to the two buildings that make up its World Heritage Site. First, and most impressive, is the Roman Theatre of Orange (Théâtre antique d’Orange). Built in the first century AD, it’s one of the most complete and best preserved Roman theatres still in existence. In Roman times, it would have held somewhere between 5000-7000 spectators, watching performances of drama, poetry, and comedy. The theatre was heavily restored in the 19th century, and is once again used for plays, opera, and music.

Elsewhere in Orange, not far from the Theatre, stands the Triumphal Arch (Arc de triomphe d’Orange). It’s not known exactly when the Arch was constructed, but current consensus places it between 20 and 27 AD, during the reign of Augustus. It celebrates the victories of Roman legions over the Gallic and Germanic tribes to the north, and the arch is covered in carvings and reliefs of battles, soldiers, and military life. It’s a beautiful place to visit, particularly in nice weather, when you can take your time slowly examining each of the carvings on the archway.

Know before you go
There are high-speed trains direct to Orange from Paris and Marseilles, or slower local trains from Avignon. The town centre is fairly small, though it’s about a kilometre between the Theatre and the Arch so you’ll need to walk or catch a taxi. Theatre entry is 9,50 euros for adults and includes an audio guide plus two hours’ free parking. The Arch stands in a public park which has free access 24/7.

Overall, Provence is a spectacular place to visit. It’s got spectacular scenery, beautiful food and drink, and incredible depth to its culture and history. And nowhere demonstrates this more clearly than the UNESCO World Heritage Sites in Provence.

Prepare for your trip to Provence with one of these travel guides!