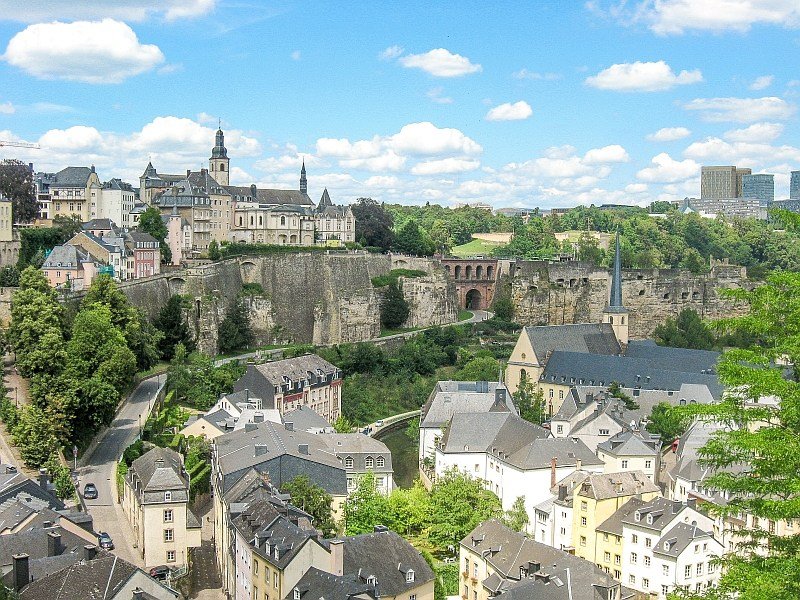 Luxembourg is one of the smallest countries in Europe. Sandwiched between France, Germany and Belgium, the entire country is a mere 2,586 square kilometres – less than the size of Rhode Island! Surprisingly for such a small country, Luxembourg’s capital (Luxembourg City) is home to an impressive UNESCO World Heritage Site: the Old Quarters and Fortifications of the City of Luxembourg. But what is it? What’s it like to visit? And why is it a UNESCO World Heritage Site? Let’s take a closer look at Luxembourg Old Town and find out!

This is a guest post by Joel, the author of World Heritage Journey. Joel will be contributing to a series of posts dedicated to less popular UNESCO World Heritage Sites in Europe. I am very happy, he agreed to share his amazing experience and knowledge with us. All photos, unless otherwise indicated, are taken by me, Daniela – the owner of this blog. All tours and places to stay are recommended by me, as well.

Read more: How to spend the perfect 4 days in Luxembourg

As the city grew, newer and larger fortifications were required. In 1340 a massive construction project enlarged and reinforced the walls and towers that dominated the city. Although Luxembourg changed hands many times over the centuries between the French, Spanish, Austrians, Prussians, and others (via both conquests and peace treaties!), the fortifications were continually expanded and strengthened.

By the time of the Napoleonic Wars in the early 19th century, Luxembourg was generally considered one of the strongest fortresses in Europe, and was sometimes referred to as the “Gibraltar of the North”. Sadly, many of Luxembourg’s fortifications were demolished in 1867 as part of a peace treaty, but several parts of them remain, and are among the best places to visit in Luxembourg City.

Read more: Staying longer in Luxembourg? Discover which places you can visit on a day trip from Luxembourg City.

What is the City of Luxembourg UNESCO World Heritage Site

These days, the Luxembourg World Heritage Site covers both the Old Quarter of the city (known as the Grund), and the remaining fortifications. It’s all located in the same small area of central Luxembourg City, around an S-bend of the Alzette River. The river itself has cut a deep gorge in the sandstone, and the Old Town is located in this flat, low-lying valley. The remaining fortifications sit on top of the cliffs above the Old Town, and include gates, bastions, forts, redoubts, and several kilometres worth of casemates, or tunnels.

One particular highlight is the area known as the Bock, a tall rocky outcrop where the original Luxembourg fortifications and castle once stood. One of the strongest parts of the whole fortress, the Bock’s cliffs are dotted with man-made caves known as “loop-holes“, where cannons were mounted to fire on attackers. The Bock area is also thoroughly excavated with tunnels; allowing for both safe storage of supplies and ammunition, and also for defenders to move around different areas of the fortress without exposing themselves to external attacks.

Up on top, there’s the Hollow Tooth tower, which is the last remnant of the old fortress gates that once guarded the Bock. Sadly, all of the other gates were fully destroyed in the 19th century, while this particular gate was only partially dismantled. All that remains is a hollow, broken tower standing atop the Bock promontory, but it’s fascinating to see and quite an iconic sight.

The Bock is connected to the Old Town via the Pont du Chateau, an unusual arched sandstone bridge built by the Spanish in the 17th century. There’s also several other aspects to the fortifications, including the Wenzel Wall, which runs across the valley below the Bock, and guards the Old Town against incursions. And of course, there’s the spectacular Corniche balcony. Sitting adjacent to the Bock, this balcony is located directly on top of the old walls, with an incredible view across the old town below. It’s sometimes referred to as Europe’s most spectacular balcony view, and it’s honestly hard to disagree with that assessment!

Within the Old Town, or the Grund, there’s plenty of older buildings to check out, though the highlight is definitely Neumünster Abbey. The tall church here with its slender spire dominates the lower town, and is both lovely and peaceful to explore. Overall, the Luxembourg Old Town and the surrounding Fortifications are a fantastic example of what late medieval towns and fortifications were like. In particular, the fortifications are a great example of how military engineering developed over the centuries, in response to both changes in technology and in tactics.

It’s a beautiful place to see and explore, particularly on a bright summer’s day when the skies are blue, the trees are green, and the Alzette River is streaming happily through the Luxembourg Old City area. Getting to Luxembourg is best done via train, with direct connections to nearby major cities including Paris, Brussels, Strasbourg, Basel, Cologne, Dusseldorf and Trier. There is an airport, but it’s fairly small and direct flights are hard to come by.

Once you’ve arrived in Luxembourg, I highly recommend taking the historic Wenzel Walk. It’s a self-guided loop walk that explores most of the major areas of the World Heritage Site, including the Bock, the Old Town, and several areas of the walls and tunnels. The walk is about 5 kilometres long and takes anywhere from 90 minutes to three hours, depending on how long you spend reading information signs, taking photographs, and admiring the view! Maps and brochures are available both online and from the tourist office on Place Guillame II. There’s also a paid group option (10 euros per person) at 3 pm every Saturday during the summertime, and private guided tours are available as well. But it’s best to just walk yourself at your own pace, as the signs are multilingual and very detailed.

Also highly recommended is a visit to the Bock tunnels, known as the Casemates du Bock. Over 17 kilometres of tunnels remain from the glory days of the fortress, and they’re mostly in excellent condition. Entry is just 7 euros for adults, and it’s both exciting and atmospheric to explore the passages, tunnels, chambers and stairways. It gives you a great sense of how soldiers must have felt during sieges and prolonged assaults, and of course the ingenious methods devised for defence and protection. The Luxembourg Casemates is definitely among the best Luxembourg City attractions.

Overall, Luxembourg’s UNESCO World Heritage Site is both surprising and fascinating, and definitely one of the best things to do in Luxembourg City. Knowing very little about Luxembourg before visiting, I wasn’t really sure what to expect! And I certainly wasn’t expecting to find an intriguing Old Town guarded by the remains of Europe’s strongest fortress, and a testament to a thousand years of military engineering. But that’s one of the great things about World Heritage Sites: finding off-beat, unusual, and unique places to visit. So I’d strongly recommend adding the Luxembourg UNESCO Site to your bucket list!

Prepare for your trip to Luxembourg City

How to prepare for your trip to Luxembourg City: