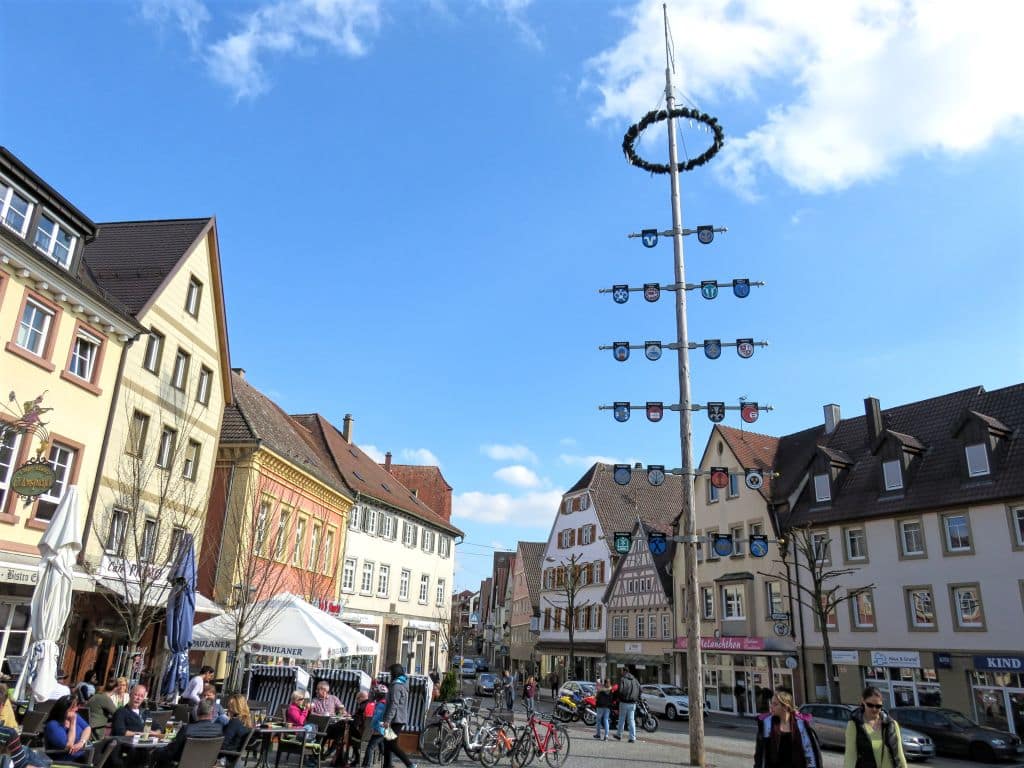 I bet you have never heard of Bretten, have you? Bretten is one of those German towns that are not on the top of any bucket list or in the spotlight of the German travel bureaus as a must visit tourist attraction. Nonetheless is Bretten much worth to visit and spend there a long weekend. It is one of my discoveries in Germany – a real hidden gem.

We went to Bretten on a long weekend escape and spent there 4 days. The town is really small, but very charming. It makes a good destination if you want to escape from the hustle and bustle of the big cities and the stress of the daily life.

In 2017 Bretten celebrated its 1250th anniversary. It was in the year 767 when the nobleman Wigilo gave a piece of land to the Lorsch Monastery under the name of “bretenheim”. This was entered into the codex of the Monastery and is considered the first time the name of Bretten was mentioned in historical documents.

Treasures like this one are expecting you behind each corner in Bretten. Take a stroll along the tiny streets and go back in time.

DISCLAIMER: This post contains affiliate links. If you make a purchase via one of them, I will earn a small amount at no extra cost for you.

How to get to Bretten?

We travelled to Bretten by car. It was very easy to reach it as the town is located close to the highways A5, A8 and A6. The nearest big cities are Karlsruhe, Heidelberg, Stuttgart and Pforzheim. If you travel by train, the best way is to do it via Karlsruhe. You can also fly to one of the nearest airports: Karlsruhe/Baden-Baden (2 hours by bus), Stuttgart (2 hours by train) or Frankfurt (2 hours and 15 min by train).

What to do in Bretten?

Bretten has one of those lovely market squares surrounded by half-timbered houses dating back from the early 18 c.

Early morning in Bretten – the market square is still empty. The town comes slowly to life. In a few hours all tables will be full and it will be difficult to find a place to sit.

Spend an afternoon on the market square

We loved it! Sitting outside on the square at one of the many cafes and enjoying a glass of beer with a Flammkuchen. Then you let the time fly by, watching the passers-by, and there exists only the gentle touch of the sun rays upon your skin.

Every Saturday the small square turns unto a thriving place with a traditional farmer’s market. You can find there fresh produce, organic products and local delicatessen.

On Saturday morning the heart of the town turns into a thriving market square. For a few hours until early afternoon you can buy fresh produce from the local farmers or specialties from the region.

Bretten offers some quite quirky museums. Guardian angels or tanning history? Get off the beaten path and lear about local history and traditions.

The German Guardian Angel Museum (Deutsches Schutzengel-Museum) – located in the Schweizer Hof, as the names suggests is dedicated to the guardian angels in various religions around the world.

The Tanning Museum is located in the Tanner’s House (Gerbershaus) – the oldest house in Bretten built in 1585 which has survived the devastating fire of 1689. Today, there’s a museum dedicated to local history, tannery and leather-working. It is open each Sunday afternoon from spring to fall.

The Tanner’s House (Gerbershaus) is the oldest house in Bretten. It is the only half-timbered house that has survived the fire of 1689. Today it’s a museum.

The Melanchthon’s House (Melanchthonhaus) – standing on the market square you can’t miss this imposing reddish Neo-gothic building. It hosts the second biggest exposition in Germany dedicated to the Reformation. It was built in 1897 on the place of the birth house of Philip Melanchthon which was burnt down in the big city fire of 1689. Melanchthon was one of the most important figures of the Reformation, a man of great erudition, a scholar, a theologian and an educator. The Melanchthon’s House has a collection of more than 9000 books, 450 original manuscripts, paintings, art works, commemorative coins and coat of arms.

The Melanchthon’s House was built on the place where once stood the birth house of the greatest German reformer. The fountain in front of it, is the only structure on the square that has survived the fire of 1689.

Do not miss the highlights of Bretten

The best part about this little German town is that at every corner you will come across a building or a place where history, traditions and legends are interwoven in a fascinating story.

The original town hall was among those buildings that disappeared in the big city fire together with its rich archive. It was reconstructed to its glory and now it proudly dominates the market square.

The Old Town Hall is dominating the market square in Bretten with its 19 c. imposing facade in “German Renaissance” style.

Kreuzkirche is the Lutheran church in Bretten.

Stiftskirche is the oldest and the most important church in Bretten, it serve the Calvinist community.

St. Laurentius is the catholic church in Bretten.

St Laurentius Church is one of the newest churches in Bretten. It was built in the 1930’s and is used by the catholic community in the town.

The Pfeifer Tower (Pfeiferturm) – this 26-m high tower was the most important defense structure of the former 13 c. city walls. The tower has been completely renovated.

The Simmel Tower (Simmelturm) – located at the most southeastern corner of the old Bretten, it is the second of importance tower of the old fortifications. It has a round form and was built in the late 14 c.

The name of this fortification tower comes from the Middle-High German “sinwel”, which means “round”. There’s a plaque on the tower that commemorates the Battle of Brettheim in 1504 – the most dramatic event in the history Bretten.

This is the famous Brettner Hundle – The Doggie of Bretten – the dog that once rescued the town. The legend says that when once the town was under the siege of the enemy and the food supplies were coming to an end, one of the city counselors came up with the idea to collect all the remaining food in town and to feed up a dog for a few days until it becomes fat and round. Then they would send the dog outside of the city’s walls.

The fountain with the the famous dog statue – the symbol of Bretten and a subject of a very popular legend about the dog who saved the town.

When the enemy would see the dog, they would think that the citizens had enough supplies to endure the siege and would leave. And this is what they did. When the enemy saw the dog, they got discouraged that they would ever win, so they cut the dog’s tail and they left Bretten with the only trophy they could get.

The statue of the famous dog (Brettner Hundle) that saved the town from the enemy during a siege. Well, at least the legend says so.

Another statue of the famous dog

Take part in a medieval festival

Peter and Paul Festival is celebrated in the weekend following 29th June, the church feast of Saints Peter and Paul. It’s a big festival where everybody is dressed in historical costumes, there are processions on the streets and various activities. This Festival is included in the list of the Intangible Cultural Heritage of UNESCO.

Take your time and search for the small details in Bretten! A real treat for the eye for the slow traveler.

The Stromberg-Heuchelberg Natural Park is a small natural park at some 20 km to the east of Bretten, perfect for hiking or biking.

The Baden State Museum in Karlsruhe (Badisches Landesmuseum Karlsruhe) is the ideal half-day trip from Bretten. The largest cultural-historical museum in Baden is hosted in the Karlsruhe Palace. The museum’s collection includes artifacts from the prehistorical time up to the modern age. It has a wonderful park and from the palace’s tower you will have a breathtaking view to the fan-shaped city centre of Karlsruhe.

The Palace of Karlsruhe with its symmetrical architecture and garden is the home of the Baden State Museum (Badisches Landesmuseum).

When visiting the Baden State Museum in Karlsruhe do not miss to climb the palace’s tower. From its top you will have a stunning 360 degree view on the city and the palace’s park.

The Palace has a beautiful park. There is a small steam train that runs through the park. The journey takes 20 minutes and the train runs on the weekends from Good Friday to All Saints Day, and in the summer also on weekdays.

Where to eat in Bretten?

For a small town, Bretten offers a great variety of quality places to eat. The market square is surrounded by many restaurants and cafés, where you can try mostly local specialties. There are also a few other restaurants in side streets, which offer very good cuisine. We walked around and each time we chose a different place to eat. We were never disappointed. When in Germany you should try the Flammkuchen! They taste the best with a wheat beer. Don’t miss also the apple strudel served with vanilla ice cream!

Where to stay in Bretten?

One of the coziest hotels where I have ever stayed is in Bretten. With unique charm and a real soul, the family-owned Hotel Krone will give you a piece of home away from home. Their secret? It’s all about the details. And the breakfast. This is my favourite breakfast of all times. Actually, their breakfast is so popular that on Sunday locals go there only to enjoy their breakfast buffet. Oh, did I mention that the hotel has this perfect location on the market square?

Click here to check the availability and prices for Hotel Krone.

Bretten is one of those little hidden gems that you need to know about in order to include it on your itinerary. Are you interested in off-the-beaten-track destinations in Germany, then you shall for sure try Blankenheim – another small town with half-timbered houses and special medieval atmosphere.

The beautiful market square of Bretten on a moonlit night. 23 thoughts on “Bretten – a real hidden gem in Germany”